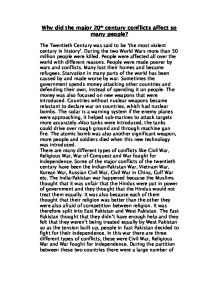 Why did the major 20th century conflicts affect so many people?

Why did the major 20th century conflicts affect so many people? The Twentieth Century was said to be 'the most violent century in history'. During the two World Wars more than 50 million people were killed. People were affected all over the world with different reasons. People were made poorer by wars and conflicts. Many lost their homes and became refugees. Starvation in many parts of the world has been caused by and made worse by war. Sometimes the government spends money attacking other countries and defending their own, instead of spending it on people. The money was also focused on new weapons that were introduced. Countries without nuclear weapons became reluctant to declare war on countries, which had nuclear bombs. ...read more.

It was also because each of them thought that their religion was better than the other they were also afraid of competition between religion. It was therefore split into East Pakistan and West Pakistan. The East Pakistan thought that they didn't have enough help and they felt that they weren't being treated equally by West Pakistan so as the tension built up, people in East Pakistan decided to fight for their independence. In this war there are three different types of conflicts, these were Civil War, Religious War and War fought for independence. During the partition between these two countries there were a large number of refugees as there's a huge rush of people moving from one country to another. ...read more.

The people who died in the war, early in the century were mainly soldiers, but in late century many innocent civilians died as well as soldiers. More people and soldiers died as the war continued. The war was fought in the city rather than on the battlefields so this involved more people. Nowadays, the technology is more advanced so that involves more killing of innocent people. In this case, many people lost their homes and became refugees. Therefore, the war in the 20th century affected both the lives of innocent civilians and soldiers. So many people were affected because the war style had changed in such a way that it involved not only soldiers but civilians as well, this was because war could be fought from a large distance, bombs could be dropped, tanks were introduced and the medicine saved a lot of the wounded. ...read more.