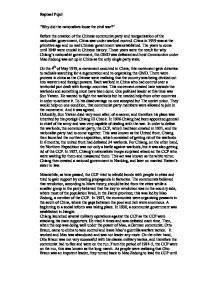 "Why did the nationalists loose the civil war?" Before the creation of the Chinese communist party and reorganisation of the nationalist government, China was under warlord control. China in 1919 was at the primitive age and no real Chinese government was established. The years to come until 1949 were crucial in Chinese history. These years were the result for why Chiang's nationalist government, the GMD was defeated and how Communism under Mao Zedong was set up in China as the only single party state. On the 4th of May 1919, a movement occurred in China, this movement gave direction to radicals searching for a regeneration and re-organising the GMD. There were protests in china as the Chinese were realising that the country was being divided out into western and foreign powers. Each warlord in China who had control over a territorial part dealt with foreign countries. This movement created hate towards the warlords and something must have been done. One political leader at this time was Sun Yatzen. He wanted to fight the warlords but he needed help from other countries in order to achieve it. To his disadvantage no one accepted but The soviet union. They would help on one condition, that communist party members were allowed to join in the movement. ...read more.

It was a threat from Japan, whom wanted to colonise China. On September 1931, Japan attacked china crushing every thing on its way. Chiang was held responsible for it he had presumably told the Army being attacked not to fight back and retreat. Chiang wanted to wipe out the CCP off the map before any war with Japan, but it was not possible. In the mean time Mao asked Chiang to join forces with the GMD to fight the Japanese, but Chiang refused. Chiang's officers were not happy with him as they wanted to fight Japan and unite for another united front with the CCP. On December 1936. Chiang was kidnapped by his 2nd officer as an act of revolt, he wanted to fight Japan and unite with the CCP. After the liberation of Chiang, he agreed to join with the CCP. Chiang and his wife appealed for world support, asking other countries to help China who were in complete crisis. Meanwhile, Japan was advancing. In 1937, Japan butchered more than 200,000 people. This was known as the rape of Nanking. In 1938, as a hope to stop the Japanese, Chiang broke the yellow river dams to flood some parts of the territory to stop the Japanese, but this act failed. As a result, thousands were made homeless and more than 100,000 people died; the Japanese continued. ...read more.

It could be argued that the CCP in way was lucky with the way the events took place during 1919-49. For example after the long march, the GMD could have beaten the CCP if it wasn't for the Japanese attacking. Because of that they had to unite and fight the Japanese together. Otherwise, as the CCP only had 6-7,000 man left, they would have lost against the Nationalists. Another example could have been that if there hadn't been so much corruption within the Nationalists, the people living in the cities and in the country side could have been taken care of and could have had better conditions to live and work in and therefore this would have created more support for the GMD. On the other hand, the change of tactics which Mao Zedong did, when he attacked the cities while the GMD armies were out in the north was the most painful event during the civil war. After those attacks, the CCP had Northern China in their hands and it was nearly impossible to stop the communists. After seeing there was no hope to win against the Communists, Chiang resigned and fled to Taiwan. In the end, in 1949, The People's Republic of China was declared, and China became a single party state; a communist state. Raphael Pujol ...read more.