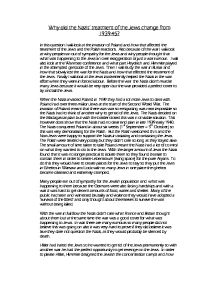 Why did the Nazis' treatment of the Jews change from

Why did the Nazis’ treatment of the Jews change from

In this question I will look at the invasion of Poland and how that affected the treatment of the Jews and the Polish reactions.  Also because of the war I will look at why people ran out of sympathy for the Jews and why people thought that what was happening to the Jews an over exaggeration or just a war rumour.   I will also look at the Wannsee conference and what part Heydrich and Himmler played in the attempted genocide of the Jews.  Then I will study the war in Russia and how that slowly lost the war for the Nazis and how that effected the treatment of the Jews.  Finally I will look at the Jews inadvertently helped the Nazis in the war effort when they were in forced labour.  Before the war the Nazis didn’t murder many Jews because it would be very open but the war provided a perfect cover to try and kill the Jews.

When the Nazis invaded Poland in 1939 they had a lot more Jews to deal with.  Poland had over three million Jews at the start of the Second World War.  The invasion of Poland meant that there was war so emigrating was near impossible so the Nazis had to think of another why to get rid of the Jews.  The Nazis decided on the Madagascar plan but with the border closed this was not viable solution.  This however does show that the Nazis had no clear end plan in late 1939 early 1940. The Nazis conquered Poland in about six weeks (1st September – 5th October) so this was very demoralising for the Polish.  But the Polish welcomed this and the Non-Jews were happy to support the Nazis in isolating and containing the Jews.  The Polish were treated very poorly but they didn’t care so long as they stayed alive.   The small amount of time taken to take Poland meant the Nazis had a lot of control on what they wanted to do to the Jews.  With the larger amount of Jews the Nazis found that it was no longer practical to isolate them so they found it easier to contain them in order to create Lebensraum (living space) for the pure Aryans.  To do this they would have to create places for the Jews to stay so they put the Jews in Ghettos in Warsaw and Lodz with so many Jews in one place the ghettos became diseased and extremely cramped.

Many people ran out of sympathy for the Jewish population and what was happening to them because the Germans were also facing hardships and with a war it was hard to get decent amounts of food, water and shelter.  Many of the public had seen and witnessed brutality and violence they would have adopted a ‘survival of the fittest’ and only thought about themselves to survive the war without being killed.

With the war in full flow the Nazis didn’t care what France and Britain thought about them but at the same time the war was a good cover for what was happening to Jews.  In war there are many rumours so many people did not believe this was going on also it was very hard to prove if they did believe it was true they dare not question the Nazis, as they would probably be silenced by death.

Hitler had hated the Jews so he wanted to get rid of the Jews permanently so with another war he had the perfect opportunity to get revenge on the Jews.  In order to please Hitler, Himmler designed the Jewish the concentration camps and how that affected the Jews.  He found out that the Einsatzgruppen death squads were finding it hard to kill in cold blood and with a war they were using ammunition in the wrong way and this was costing the Nazis lots of money.  So the Nazis changed their killing method to make more humane for foe the killers.  They used the gas Zyklon B.  Himmler influenced most of the holocaust.  Hitler’s other main official, Heydrich, was one of main architects of the Holocaust.  He made most of the plans to murder the Jews.

In 1941 there was a huge turning point in the war the Nazis used operation Barbarossa (invading Russia) this was an immense mistake by the Nazis.  The Nazis though invading Russia was going to be easy as the Russian army was supposedly weaker than the French army and it took the German army just six weeks to defeat the French.  When the Russian winter hit the Nazis they weren’t used to the cold like the Russians were and many of the Nazis were killed by it.  This left them open to attack by the Russians.  After they realised they were losing the war they wanted to destroy the evidence of what was happening to the Jews.  With defeat in mind the senior Nazis officials met at the Wannsee Conference on the 20th January 1942, chaired by Heydrich, this was used to discuss the ‘final solution’ to kill all the European Jews.  The Nazis were keen to win the race war against the Jews so when they realised that if they were losing the war they would need to use a more systematic way of killing the Jews faster than in the ghettos.  The ghettos had to be liquidated because they were diseased and the walls round the ghettos didn’t prevent the disease spreading.  Also the ghettos were too visible and this depressed non-Jews as well, so the concentration camps were set up in the countryside to hide the persecution.  The concentration camps killed on far more sufficient scale from the Nazis point of view.  They also used the concentration camps to get the Jews to work to death in order to help in the war effort.

Following on from that last point with most of the Germans on the frontline, they needed people work for them in order to keep the war going.  They decided that it would be easier and cheaper to force the Jews into working for them than employing German Citizens.  The Jews would have probably worked with machinery to make bombs and arms for the Nazi army.  If they couldn’t work anymore they were murdered but the Nazis didn’t bother with making graves that was too much work instead they incinerated the bodies.  However the Nazis used the Jews skin on lampshades took away their hair and used it to be stuffed into duvets and pillows and also used the fat to make human soap.  This was a disgusting way to treat the bodies but then it doesn’t surprise me after the way they treated the Jews when they were living.

The war changed the way people viewed life they started to care only for themselves in order to survive.  In my opinion the big change came when they started to lose the war and then held the Wannsee conference in order to win their race war as it was the only war they could see winning.