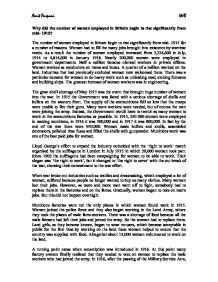 Women joined the police force and they also began working in the Land Army, where they took the places of male farm-workers. There was a shortage of food because all the male farmers had left their jobs and joined the army. So the women had to replace them. Land girls, as they became known, began to wear trousers, which became acceptable in public for the first time by working on the land these women helped to ensure that the country was supplied with food. Altogether about 13,000 women volunteered to work on the land. A turning point came when conscription was introduced in 1916. At this point many factory owners finally realized that they needed to take on women to replace the male workers who had joined the army. In 1916, after the passing of the Military Service Acts, the need for women workers became even greater as men were now conscripted into the army. ...read more.

Women also began to be accepted in the legal professions. In 1916 banks began to use women to collect money from branches in the city, and Reuters, the news agency, used women as messengers. In 1917 the first woman diplomat was appointed by the British Government. The employment of women was not always popular. In 1915 there were strikes against women workers and the government was forced to sign agreements with unions which stated that women would not keep their jobs at the end of the war. In some factories notices were displayed warning women that they would be dismissed when the war came to an end. In conclusion, the number of women employed in Britain began to rise significantly from mid 1915 for a number of different reasons, but mainly because of the huge number of jobs that had to be filled after Britain's men had to leave their jobs to fight in the war. Many women who had worked before had to do jobs that were done by men. ?? ?? ?? ?? Amit Parpani 4NB ...read more.