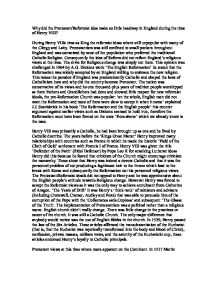 Why did the Protestant/Reformist idea make so little headway in England during the time of Henry VIII?

Why did the Protestant/Reformist idea make so little headway in England during the time of Henry VIII? During Henry VIIIs time as King the reformist ideas where still unpopular with many of the Clergy and Laity. Protestantism was still confined to small pockets throughout England and was ostracized by most of the population who preferred the traditional Catholic Religion. Consequently the idea of Reform did not reflect England's religious views at the time. The drive for Religious change was simply not there. This opinion was challenged in 1964 by A.G. Dickens work 'The English Reformation' he stated that the Reformation was widely accepted by an England willing to embrace the new religion. This raises the paradox if England was predominantly Catholic and obeyed the laws of Catholicism how and why did the country become Protestant. The nation was conservative of its views and its one thousand-plus years of tradition people worshipped as there Fathers and Grandfathers had done and showed little respect for new reformist ideals, the pre-Reformation Church was popular: 'on the whole, English men did not want the Reformation and most of them were slow to accept it when it came' explained J.J. ...read more.

The Protestant/Reformist ideals did not appeal to Henry and he was apprehensive about the English people's attitude towards Religious change. However Henry was forced to accept the Reformist views as it was the only way to achieve annulment from Catherine of Aragon. 'The Years of Drift' It was Henry's 'think-tank' of ministers and advisers (including Cromwell, Cramer, Audley and Foxe) that was able to persuade him of the corruption of the Pope with the 'Collectanea satis Copiosa' and subsequent 'The Glasse of the Truth'. The implementation of Protestantism was a political rather than a religious move. English church didn't really change. There was little change in the practices or canon of the church. It was still a Catholic Church. The only major difference that anybody would notice was the use of English Bibles in the church. In 1539, Henry passed the law of the Six Articles. These articles affirmed the transubstantiation of the Eucharist (that is, that the Eucharist was mystically transformed into the body and blood of Christ), confession, private masses, celibate vows, and the sanctity of the Eucharistic cup, these articles endorsed Henry's loyalty to Catholic principals. ...read more.

The general Laity was afraid of the new ideas as they condemned the Pope a figure and symbol of God. To disapprove of and 'disown' the Pope may have been viewed as an 'attack' on God. Wolsey took this stand point; in fact it was mainly Wolsey's unenthusiastic approach to the annulment and subsequent break with Rome that delayed the 'Kings Great Matter'. Wolsey's main aim was to become Pope a task that would be impossible to take on if England was to have an unhealthy relationship with Rome; accordingly Wolsey's was reluctant about the annulment a matter that would lead to his downfall. The most major event during Henry VIIIs reign was the 'Pilgrimage of Grace' in the north of England, this showed people where averse to the Change of religion. These protests of 30,000 people strong show that Protestantism was not able to progress and it could not develop on its own, instead Protestantism was 'forced' upon the nation over a period of time. Reformation was seen as a process that could divide the 'Christendom', something that people feared as this may send them to 'Hell' which was the foremost fear of the Catholic church attendance. ...read more.