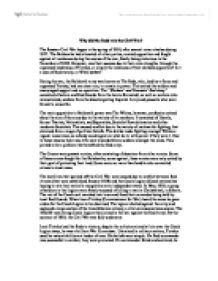 Why did the Reds win the Civil War?

Why did the Reds win the Civil War? The Russian Civil War begun in the spring of 1918, after several minor clashes during 1917. The Bolsheviks had alienated all other parties, created opposition and fought against all resistance during the course of the war, finally being victorious in the November of 1920. However, was their success due to their own strengths, through the organised leadership of Trotsky, or simply the weakness of their divided opposition? Is it a case of Red victory, or White defeat? During the war, the Bolshevik army was known as The Reds, who, lead by a fierce and organised Trotsky, had one clear aim; to remain in power. This united the soldiers and encouraged support and co-operation. The "Workers' and Peasants' Red Army" consisted of sailors and Red Gaurds from the heroic Kronstadt, as well as workers who volountereed, soldiers from the disentergrating Imperial Army and peasants who were forced to conscribe. The main opposition to Bolshevik power was The Whites, however, confusion existed about the aim of the army due to the variety of its members. It consisted of liberals, former Tsarists, Nationalists, and Separatists, Socialist Revolutionaries and other moderate Socialists. ...read more.

The Whites in comparison, had leaders who have been described as "second rate." Often cruel in their behaviour and treating men with contempt encouraged deserting due to the lack of co-operation and support in White ranks. There was an extraordinary amount of corruption and indiscipline, Denkin, a white military leader, was quoted "I can do nothing with my army. I am glad when it carries out my orders." Units of the White army were reported to be involved with the black market, prostitutes and drugs. This in comparison to the strict organisation of Trotsky's troops gives an insight into the reasons for Red victory. As is demonstrated above, it is clear that Red organisation was far superior to that of the Whites. The Bolsheviks had a clear unified structure and Trotsky had transformed the army into an effective fighting machine. Whereas the Whites could not decide whether they were fighting for Monarchism, Republicanism or the Constituent Assembly and were divided by their views on national minorities. They therefore struggled to devise an effective political strategy. This conflict of interest did not only exist amongst the troops, but the officers as well, who often disliked and distrusted each other, for example, other generals were suspicious of Kolchak (who led the Whites in the east and was eventually executed in 1920) ...read more.

The large population of the area also allowed the Bolsheviks to conscript large numbers to fight. Therefore Red armies often vastly outnumbered their White opponents. Certain factors that should have benefited the Whites did not, such as the role of other countries that were keen to stop the spread of communism. Their efforts were half-hearted, and even allowed the Bolsheviks to promote propaganda of protecting Russia from foreign forces. This use of propaganda proved to be important for both sides, the Whites never made full use of the technique, unaware of its value in gaining support. Whereas the Reds used powerful and imaginative slogans and images degrading the White forces and promoting the communist regime. To conclude, there were many factors that contributed the victory of the Reds in the Civil War. Although the location of their army, the weaknesses of the opposition, the support from the peasants all proved to be important, I feel that the Reds victory relied on the leadership of Trotsky that formed the army into a viscous, organised military force. This advantage proved to be overwhelming, combining with the many disadvantages that were deep-rooted in the White army. In the end the strong leadership that Trotsky provided the army with contributed to their huge success, defeating their significantly inferior opponents. ...read more.