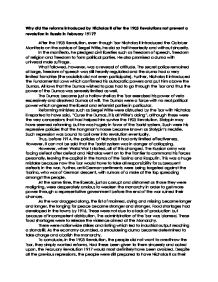 Why did the reforms introduced by Nicholas II after the 1905 Revolutions not prevent a revolution in Russia in February 1917?

Why did the reforms introduced by Nicholas II after the 1905 Revolutions not prevent a revolution in Russia in February 1917? After the 1905 Revolution, even though Tsar Nicholas II introduced the October Manifesto on the advice of Sergei Witte, he did so half-heartedly and without sincerity. In the manifesto, he pledged civil liberties such as freedom of speech, freedom of religion and freedom to form political parties. He also promised a duma with universal male suffrage. What followed, however, was a reversal of attitude. The secret police remained at large, freedom of speech was still heavily regulated and the duma had a very limited franchise (the socialists did not even participate). ...read more.

Stolypin may have seemed reforming but he was hugely in favor of the Tsarist system. Such were his repressive policies that the hangman's noose became known as Stolypin's necktie. Such repression was bound to boil over into revolution eventually. Thus, before 1914, the policies of Nicholas II had only limited effectiveness. However, it can not be said that the Tsarist system was in danger of collapsing. However, when World War I started, all of this changed. The Russian army was facing defeat after defeat and Nicholas went on to the frontier to command his forces personally, leaving the capital in the hands of the Tsarina and Rasputin. ...read more.

The administration of the Tsar was blamed. These food shortages were to release the violence aimed at the Monarchy. There were nationwide strikes and rioting which led to industrial output reaching a standstill. As the economy crumbled, a smouldering duma became determined to take charge and abolish the monarchy. To conclude, in the 1905 Revolution, the people did not want to overthrow the Tsar, they simply wanted reforms. Had these been given to them sincerely and acted upon, the February Revolution 1917 would most definitely have been avoided. Despite all the previous repressions, the people were still prepared to have Nicholas II as their father figure. However, the utter contempt with which he treated the Dumas and the way he went back on his word was what convinced the people that revolution was the only way out. ...read more.