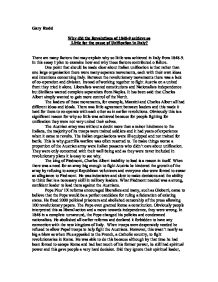 Why did the Revolutions of 1848-9 achieve so Little for the cause of Unification in Italy?

Gary Rudd Why did the Revolutions of 1848-9 achieve so Little for the cause of Unification in Italy? There are many factors that may explain why so little was achieved in Italy from 1848-9. In this essay I plan to examine how and why these factors contributed o failure. One point that should be made clear about Italian unification is that rather than one large organisation there were many separate movements, each with their own ideas and intentions concerning Italy. Between the revolutionary movements there was a lack of co-operation and division. Instead of working together to fight Austria on a united front they tried it alone. Liberalists wanted constitutions and Nationalists independence but Sicilians wanted complete separatism from Naples. It has been said that Charles Albert simply wanted to gain more control of the North. The leaders of these movements, for example, Mazzini and Charles Albert all had different ideas and ideals. There was little agreement between leaders and this made it hard for them to co-operate with each other as in earlier revolutions. ...read more.

He abolished all earlier reforms and declared it forbidden to have any connection with the new kingdom of Italy. When troops were desperately needed he refused to allow Papal troops to help fight the Austrians. However, this wasn't nearly as big a blow as when Pius appealed to the French, a Catholic country, to fight revolutionaries in Rome. He was able to do this because although by that time he had been forced to escape Rome and had lost much of his former power, he still had spiritual power and this gave people a very hard decision. Did they ignore their spiritual leader, appointed by God? Or did they fight on and face excommunication? There were those who decided to fight on but many chose their religion over unification. Again this was a blow especially to the army opposing Austria and removed a huge amount of support. With the French now fighting for the Papal presidency what the revolutionaries really needed now was foreign help but Mazzini was stubborn and stood fast on his policy of no foreign help. ...read more.

Once again they made the mistake of excluding the peasants and ordinary people in decisions. This is why there was such a lack of resistance when the Austrians returned to regain control. In Piedmont however, men were given the chance to gain experience in statecraft and parliament. This is perhaps why the Piedmont constitution remained. In conclusion, I feel that all the factors boil down to division, lack of co-operation and poor leadership. It seems ridiculous that people fighting for unification were so divided. The fact that some were not even willing to co-operate with people fighting for a common cause is reason enough for why so little was achieved. Having said this there were some positive outcomes. Because Piedmont had kept its constitution it now became a breeding ground for nationalist ideas, Mazzini and Garibaldi resided in Piedmont for a time. Charles Albert abdicated and was replaced by his son, Victor Emmanuel who was patriotic and had witnessed his father's mistakes. Another lesson learnt was that unification could not be done without foreign help, the revolutions of 1848-9 clearly demonstrated this. ...read more.