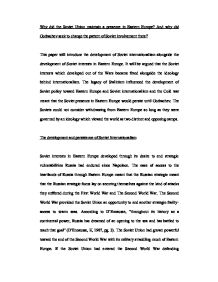 Why did the Soviet Union maintain a presence in Eastern Europe? And why did Gorbachev seek to change the pattern of Soviet involvement there?

With one hand Eastern European communist parties were given the right to adopt different paths to development but on the other, the actual power of the communist parties to go against the principle of democratic centralism was limited. The implementation of different paths to communism was restricted because "any discussion of theirs must damage neither socialism in their own country nor the fundamental interest of the other socialist countries nor the worldwide workers' movement, which is waging a struggle for socialism" and "whoever forgets this by placing sole emphasis on the autonomy and independence of communist parties lapses into one-sidedness, shirking his internationalist obligations" (Pravda, September 26, 1968, cited in Gati,C, 1990, pg. 47). Soviet interests in Eastern Europe The foremost reason that the Soviets remained in Eastern Europe for so long despite persistent crisis were because it acted as a defensive buffer against Western European states. The defensive 'glacis' was held to be particularly important in the aftermath of the Second World War and the onset of the Cold War and the arms race further increased the importance of ensuring that western influence was kept at bay in Eastern Europe. The Cold War also established Eastern Europe as a base for maintaining an offensive threat against the west. For Brown, there are three aspects of Soviet offensive strategy in Eastern Europe-these are first ideological grounds in which "Eastern Europe is the advance guard of the world communist movement"; second, its military use "for purposes either of intimidation or actual aggression; finally, in its political use, "Eastern Europe is a suitable base for political initiatives and propaganda designed to manipulate Western Europe and particularly the Federal Republic of Germany" (Brown, J, cited in Vine, R (ed), 1987, pg. ...read more.

is that the failure of Soviet policy to properly impress communist values into the people of Eastern Europe for whatever reason meant that the people were still influenced by western attitudes. The tendency of Eastern Europeans to compare their situation with the west rather than other parts of the Union meant that Moscow became the target for any blame for the economic position. The people of Eastern Europe ceased on the first opportunity granted them by Gorbachev to push for withdrawal from the Union. Whether it was crucial underestimation of the potential for popular unrest in Eastern Europe given these sweeping reforms or a conscious decision to initiate a controlled withdrawal from Eastern Europe is a subject of much debate. The blame for the collapse is similarly contentious. But the underlying reasons for Gorbachev's reform of the relationship with Eastern Europe roughly correlate with the gradual realisation that the reasons to remain in Eastern Europe no longer existed. These reasons overlap with the main area arguments for the collapse. Economically the Soviet Union was bearing the cost of the relationship. Gorbachev had reformed the party ideology as far as foreign policy was concerned by rejecting the Brezhnev doctrine and his new political thinking began to promote the view that the west was to be viewed as an opportunity rather than a fearsome opponent. Militarily the strategic reasons for maintaining control of Eastern Europe were outweighed by the financial cost. Finally and most crucially, the decision not to use force to 'rescue' the communist parties of Eastern European countries from popular unrest meant that when push came to shove the Soviets had no other solution. ...read more.