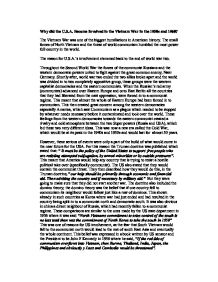 Why did the U.S.A. Become Involved in the Vietnam War in the 1950s and 1960? The Vietnam War was one of the biggest humiliations in American history. The small forces of North Vietnam and the threat of world communism humbled the most power full country in the world. The reason for U.S.A.'s involvement stemmed back to the end of world war two. Throughout the Second World War the forces of the communist Russians and the western democratic powers united to fight against the great common enemy, Nazi Germany. Shortly after, world war two ended the two allies broke apart and the world was divided in to two completely appositive group, these groups were the western capitalist democracies and the eastern communists. When the Russian's red army (communists) advanced over Eastern Europe and onto East Berlin all the countries that they had liberated from the nazi oppression, were forced in to a communist regime. This meant that almost the whole of Eastern Europe had been forced in to communism. This then created great concern among the western democracies especially America, which saw Communism as a plague which needed to be stopped by whatever needs necessary before it contaminated and took over the world. These feelings from the western democracies towards the eastern communist created a rivalry and cold atmosphere between the two Super powers (Russia and USA), which led these two very different ideas. ...read more.

said, "If the red tide of communism overflows into Vietnam, then Burma, Thailand, India, Japan, the Philippines and obviously y Laos and Cambodia would be threatened". Nevertheless USA involvement in Vietnam began soon after the Japanese surrender in 1945 when it was decided that Vietnam along with Laos and Cambodia would be returned to the French empire. This decision came as a shock to the Vietnamese And on 2nd September 1945 Ho Chi Minh the leader of the communist group the Vietminh declared Vietnam's independence. However the French refused to leave Vietnam because of its rich minerals, and made a decision to engage themselves in war against the Vietminh. By 1952, 90,000 out of the 500,000 soldiers fighting for French rule where either killed, wounded or captured and the French had already spent several hundred million francs on war and were looking defeated. This left them with one option, to ask the USA for financial aid. Which led to there first intervention Despite there initial disagreement with the recreation of the French empire, president Truman decided to give US $ 3 billion to help the French. Despite the USA's financial aid the French suffered a major defeat at Dien Bien Phu in May 1954 that led them to withdraw there troops, and hold a peace conference at Geneva to decide the future of Vietnam. ...read more.

As a counter act to this the US government began patrolling the coast of Vietnam in an approach to prevent the North Vietnam from sending aid to the Vietcong. In Augsut1964 North Vietnam attacked a US patrol ship in the gulf of Tokin. This offence was seen as an act of war by the US and in 1965 the Americans openly decided to declare war on North Vietnam. When president Johnson said "we are in Vietnam to fulfil one of the most solemn pledges of the American nation. Three presidents over eleven years have promised to help defend this small and valiant nation. We cannot now dishonour our word". After this statement the US sent one and half million troops to South Vietnam and began intensive bombing over North Vietnam in order to destroy bridges and supply routs to the Vietcong. As a result of this Russia and China began supplying North Vietnam with weapons. Some of these weapons where used by North Vietnam in their defence against the US but the majority where smuggled to the south through hidden rail tracks known as the Ho Chi Minh trail and many other ways of travel. By this time it was very clear that the USA where more than involved in Vietnam they where now officially at war. ?? ?? ?? ?? ...read more.