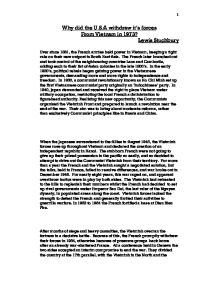 Why did the U.S.A withdraw it's forces from Vietnam in 1973?

Why did the U.S.A withdraw it's forces From Vietnam in 1973? Lewis Stuchbury Ever since 1861, the French armies held power in Vietnam, keeping a tight rule on their new outpost in South East Asia. The French later branched out and took control of the neighbouring countries Laos and Cambodia, adding each to their list of Asian colonies in the late 1800's. In the early 1920's, political rebels began gaining power in the Vietnamese governments, demanding more and more rights to independence and freedom. In 1930, a communist revolutionary known as Ho Chi Minh set up the first Vietnamese communist party originally an 'Indochinese' party. In 1940, Japan demanded and received the right to place Vietnam under military occupation, restricting the local French administration to figurehead authority. Realising this new opportunity, the Communists organized the Vietminh Front and prepared to launch a revolution near the end of the war. Their aim was to bring about moderate reforms, rather than exclusively Communist principles like in Russia and China. When the Japanese surrendered to the Allies in August 1945, the Vietminh forces rose up throughout Vietnam and declared the creation of an independent republic in Hanoi. ...read more.

In 1975, the Communist North finally broke through into Saigon and claimed victory over South Vietnam, creating a new Communist rule above and below the 17th parallel. What the Americans didn't expect was that they were successful enough in Vietnam to stop the Domino Theory after only two countries following the fall of Vietnam, meaning the majority of the South Pacific was safe from communist rule. The United States withdrew their forces from Vietnam for a multitude of reasons. The Military reasons for this were mainly related to what the Vietcong could do on their own territory, which the United States hadn't trained for, and were as such, unable to adapt to. The main style of combat used by the Vietcong was Guerrilla Warfare, which consisted on stealth like tactics, skulking around in the dense forests of Vietnam, ambushing your opponent at any given time or leaving ingenious booby-traps for the American troops to walk straight into unknowingly. This was a factor to why American pulled out because they were not used to jungle condition, therefore they were easy targets for the Veteran Vietnamese, whereas the Americans preferred open warfare with the use of machine monsters such as tanks and large scale bombers. ...read more.

This was an important factor to why they pulled out because the American conscripts should have never had to be in the position where they had to use drugs, so the American government had to feel responsible for this. The civilian aspects of the pull out were that America was under pressure from humanitarian groups from all over the world who saw them as monsters, dropping napalm on innocent civilians of a foreign country and causing mutations and miscarriages of the unborn children pregnant women with Agent Orange. This pressure caused Johnson to quit his post as President, and Nixon was determined not to follow suit, so he learned from Johnson's mistakes, and stopped napalm and Agent Orange missions, and promptly removed all forces from Vietnam, so this aspect was very important when it came to the question of why American pulled out of Vietnam. The final reasons for pulling out Vietnam were brought upon back home in the United States where pressure groups, student protests and Anti-War protestors were doing all they could to push the Presidents as far as they could in order to get the result they needed. This pressure seemed to be the last straw, so Richard Nixon brought about Vietnamisation and gave the people their wishes and pulled his troops out of Vietnam. 1 ...read more.