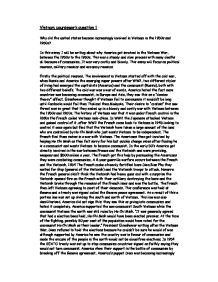 Why did the united states become increasingly involved in Vietnam in the 1950s and 1960s?

Vietnam coursework question 1 Why did the united states become increasingly involved in Vietnam in the 1950s and 1960s? In this essay I will be writing about why America got involved in the Vietnam War, between the 1950s to the 1960s. This was a steady and slow process with many deaths all because of communism. It was very costly and bloody. This essay will focus on political reasons, military reasons and economy reasons. Firstly the political reasons. The involvement in Vietnam started off with the cold war, when Russia and America the emerging super powers after WW2, two different styles of living had emerged the capitalists (America) and the communist (Russia), both with two different beliefs. The cold war was a war of words, America hated the fact more countries was becoming communist, in Europe and Asia, they saw this as a "domino theory" affect. Eisenhower thought if Vietnam fell to communism it wouldn't be long until Cambodia would fall then Thailand then Malaysia. Their desire to "contain" this new threat was so great that they ended up in a bloody and costly war with Vietnam between the 1950s and 1960s. The history of Vietnam was that it was under French control in the 1880s the French called Vietnam indo-china. In WW2 the Japanese attacked Vietnam and gained control of it, after WW2 the French come back to Vietnam in 1945 looking to control it once again but ...read more.

In 1954 the SEATO treaty was set up to stop communism countries signed on faithly saying they would not turn communist. America show their support in the battle of communism by breaking off the Geneva agreement. America's puppet Diem was becoming increasingly unpopular in South Vietnam. Many people thought his regime was corrupt as he set his family and Christians to positions of power, And as Vietnam was a Buddhist country. Protests were made, which were Buddhists setting them selves on fire outside of government buildings. Though he was still supported by the Americans purely because of his hate of communism. Diem was later on assassinated through fear that the US will withdraw their support. Three weeks later President JFK was also assassinated, Diem's successors are still not much better then Diem himself. Then new president is now Lynden B Johnson elected in 1963 he knows very little about Vietnam but when he decides to take a trip out their, he fought it was "the biggest damn mess I ever saw." Their determination had risen to combat communism but their cost of battling communism had also risen. America had become so involved in Vietnam it would be impossible to get out again. These political reasons are all very important on why America became so involved in Vietnam. Military reasons were another important reason why America became so involved in the Vietnam War. ...read more.

The US have now found themselves directly involved in the conflict. These are vital reasons on why America became so involved in the Vietnam war The economic reasons in Vietnam were the first reason why America became involved in the war. The first direct involvement America had in the Vietnam War was helping France with money. $500 million a year, which helped the French, try to win back "Indo-China" When Diem took power over the south of Vietnam The US then start to pour money into Diem's regime $1.6 billion a year Which was very costly for the Americans. Of course America needed weapons for the war so the weapons manufacturers all over America were making tons of money, which did the American economy, good. North Vietnam was being supplied with money and weapons to. They were getting it from Russia and China who were helping for the Communist aid. These were the economic factors of why America was so involved in the Vietnam War. I think the most important reason of all on why America got so involved in the war was because of the cold war and the battle between communisms. America were so scared of Russia and the communists they wanted to prove a point and they found Vietnam the perfect place to prove the point, that communism will not b allowed to spread Through Vietnam they tried to prevent the "domino Theory" by "containment methods in Vietnam. ...read more.