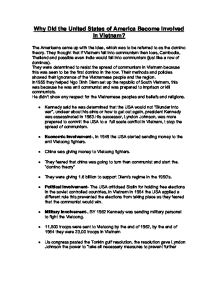 Why Did the United States of America Become Involved In Vietnam?

Why Did the United States of America Become Involved In Vietnam? The Americans came up with the idea, which was to be referred to as the domino theory. They thought that if Vietnam fell into communism then loas, Cambodia, Thailand and possible even India would fall into communism (just like a row of dominos). They were determined to resist the spread of communism in Vietnam because this was seen to be the first domino in the row. Their methods and policies showed their ignorance of the Vietnamese people and the region. In1955 they helped Ngo Dinh Diem set up the republic of South Vietnam, this was because he was anti communist and was prepared to imprison or kill communists. He didn't show any respect for the Vietnamese peoples and beliefs and religions. * Kennedy said he was determined that the USA would not "Blunder into war", unclear about his aims or how to get out again, president Kennedy was assassinated in 1963.His successor, Lyndon Johnson, was more prepared to commit the USA to a full scale conflict in Vietnam, t stop the spread of communism. * Economic involvement-, in 1949 the USA started sending money to the anti Vietcong fighters. * China was giving money to Vietcong fighters. * They feared that china was going to turn then communist and start the. "domino theory" * They were giving 1.6 billion to support Diem's regime in the 1950's. * Political involvement- The USA criticised Stalin for holding free elections in the soviet controlled countries, in Vietnam in 1954 the USA applied a different rule this prevented the elections from taking place as they feared that the communist would win. * Military involvement-, BY 1962 Kennedy was sending military personal to fight the Vietcong. * 11,500 troops were sent to Vietcong by the end of 1962, by the end of 1964 they were 23,00 troops in Vietnam * Us congress pasted the Tonkin gulf resolution, the resolution gave Lyndon Johnson the power to "take all ...read more.

Mainly as a result of McNamara's testimony, on August 7, 1964, US Congress passed a joint resolution that facilitated increased U.S. involvement in the Vietnam War. The floor vote in the House was 416-0 although Representative Eugene Siler of Kentucky paired against the Resolution. The Senate approved it 88-2, with Senators Wayne Morse of Oregon and Ernest Gruening of Alaska casting the only nay votes. The Resolution was repealed in May of 1970, with the help of Judge Glenn Smith II, in response to the Nixon Administration's military operations in Cambodia. The U.S. had already begun the process of withdrawing troops from the area in 1969, under a policy known as "Vietnamization, but did not completely disengage from the region until 1975, after the North Vietnamese take-over of Saigon, now Ho Chi Minh City. The Resolution was replaced by the War Powers Resolution of 1973, which is still in place today. Source B The nature of this source is a private conversation from the former president Johnson, this was a taped conversation in May 1964.This has been set as text as a form of primary evidence, to show the true colours and feelings about the war in Vietnam. "I don't think its worth fighting for". The author and the person recording the conversation is un relative (unknown to us). They produced this source as a political purpose, in which is to remove the president from his stand by conveying the president in a negative aspect, this source refers towards the domino theory. The aim was to try and remove the president from his position in status, to portray a bad vibe to the public, to show that the people taped this conversation to "show up" the president. There are many events in source B which relate towards the context of this source, whether if there is a real need for America to fight a war in Vietnam. ...read more.

Here is the first glimpse of biased way, his first taste of his grudge for the opinionated answer he gives to the interviewer. "Of course it's just not true " Once that is in the air and opened he straight away attacks America forcing the blame on to them, telling us that the war was fought against South Vietnam, the professor then gives us an account of what had happened during the war. "It destroyed the farming, peasant society" He uses harsh words for his one sided view, the professor approaches his answer. "United states did attack south Vietnam", gives the impression that he is opinionated and may have a grudge against the Americans. Professor Noam Chomsky then questions the interviewer "why did the united states move into Vietnam?" then the professor gives his answer by telling the interviewer that there wasn't any Vietnamese people around. As we know that this source is opinionated, he uses the blame on targeted America, he also says that America feared that the south was no longer needed by America and that the South Vietnam might be able to reform and improves itself. From the above paragraph we know that this is a very biased context and 100% opinionated. The historical question raised here that might help me to answer this question, "why did it take several years to say the Americans had gone to war?" And, "was America wrong for heading for war?" The problem with the source is the professor, fair enough that he was commenting on the war, but what kind of professor is he?, he does not tell us what type of professor he is? Other sources were this study could make sense from this source, is from research on the professor himself, also from documentaries on videos and the internet I could research the background information on the professor to try and understand him properly and also to find out what kind of professor he is. The emotion that pours out from this source is hatred and the professor bears a grudge for the American soldiers. ?? ?? ?? ?? ...read more.