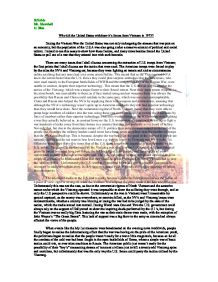 Why did the United States withdraw it's forces from Vietnamin 1973?

H.Noble Mr. Marshall 11 Blue Why did the United States withdraw it's forces from Vietnam in 1973? During the Vietnam War the United States was not only undergoing the stresses that war puts on an economy, but the population of the U.S.A was also going under a massive amount of political and social reform. I intend to use this essay to show how these factors, and many more besides forced the United States to pull out of a war that they entered into with such bravado. There are many issues that I shall discuss concerning the extraction of U.S. troops from Vietnam; the first points that I shall discuss are the tactics that were used. The American troops were forced to play by the rules the NVA and Vietcong set, because they were fighting on terrain and under circumstances unlike anything that any army had ever come across before. This meant that as the Vietcong and NVA knew the terrain better than the U.S. forces they could plan surprise ambushes that the Americans, who were used mainly to the European battlefields of WWII and the straight fighting of the Korean War, were unable to counter, despite their superior technology. ...read more.

country was winning or losing the war had to be judged by the state of the nation, which the media turned into turmoil. During World wars One and Two the U.S. government could always rely on the support of Hollywood to show the inspiring deeds performed by the G.I.'s, but during the Vietnam war no really big films featuring the war as their main theme were made, with the exception of John Wayne's "The Green Berets". This lack of support was a big blow to the army as cinema had always affected the views of the people. When events like the My Lai massacre were broadcasted on the evening news worldwide, people finally began to realise the dehumanising effect that the war was having on the pride of the American youth, the politicians began to realise that the people weren't ready for a war of this magnitude, because so far all the combats of the cold war had been fought in the open battlefields of Korea, where a simple war of basic tactics could win, or over telex machines to Russia. The American public just weren't ready for the possibility of their "boy's" massacring dozens of innocent civilians just to kill a twenty odd Vietcong spies and recruiters, but unfortunately that was the only way the U.S. ...read more.

Which meant another large proportion of the population was against war in Vietnam. It is my opinion that from the facts I have discussed the most important reason for the withdrawal of troops from Vietnam was simply that the U.S.A. is a democratic country, I think this because the media in a democratic country is free to say whatever they want, whereas the North Vietnamese government could control the press and as such could control the will of the people. Also because the U.S. is democratic it is subject to the will of the people, and can therefore only do what appears best for the people in the short term not the long term, as it is immediate results that win votes. If the U.S. had been communist that would have meant that the people would have to have followed the will of the party, and as such the army could have had as many men as it needed to crush the NVA and Vietcong. Last of all as all the land in a communist country is owned by the people all the profits go to the party so economic cost would not have been as big of a worry as it was. ...read more.