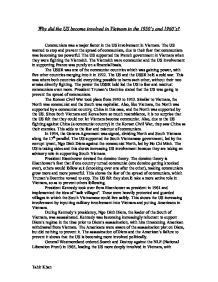 Why did the US become involved in Vietnam in the 1950's and 1960's? Communism was a major factor in the US involvement in Vietnam. The US wanted to stop and prevent the spread of communism, due to their fear that communism was becoming too powerful. The US supported the French government in Vietnam when they were fighting the Vietminh. The Vietminh were communist and the US involvement in supporting France was purely on a financial basis. The USSR was one of the communist countries which was gaining power, with five other countries merging into it in 1922. The US and the USSR held a cold war. This was where both countries did everything possible to harm each other, without their two armies directly fighting. The power the USSR held led the US to fear and mistrust communism even more. ...read more.

The US is taking sides and this shows increasing US involvement because they are taking an advisory role in supporting South Vietnam. President Eisenhower devised the domino theory. The domino theory is Eisenhower's fear that if one country turned communist (one domino getting knocked over), others would follow suit (knocking over one after the other), making communism grow more and more powerful. This shows the fear of the spread of communism, which Truman's Doctrine vowed to stop. The US felt they should take a more active role in Vietnam, so as to prevent others following. President Kennedy took over from Eisenhower as president in 1961 and implemented the idea of "safe villages". These were heavily protected and guarded villages in which the South Vietnamese could live safely. This shows the US increasing involvement by inputting military involvement into Vietnam and putting Americans in Vietnam. ...read more.

However, the Gulf of Tongking incident where Vietnamese torpedo boats attacked a US destroyer, led president Johnson to get congress to agree that the US can "use all measures necessary to repel forces". US involvement in Vietnam was heightening greatly, with US forces allowed to kill any enemies The US became completely submerged in Vietnam when Vietcong forces attacked a US base at Pleiku, which left eight Americans dead and destroyed ten of the American aircraft. This provocation led the US to have an excuse to elevate the war by bombing North Vietnam. Now that the US had some sort of justification, the war was then in full force. Operation Rolling Thunder was a part of this bombing campaign in North Vietnam, but air crews could not bomb main cities such as Hanoi or Haiphong due to Soviet relations. The war between the US and North Vietnam was underway. ?? ?? ?? ?? Tahir Khan ...read more.