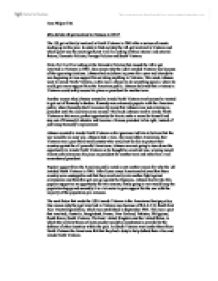 Why did the US get involved in Vietnam in 1965?

Why did the US get involved in Vietnam in 1965? The US got militarily involved in North Vietnam in 1965 after a serious of events leading up to this year. In order to find out why the US got involved in Vietnam and which point was the most significant I will be looking at three internal and external factors; Domestic Policies, Foreign Policies and South Vietnam. First of all I will be looking at the Domestic Policies that caused the US to get involved in Vietnam in 1965. One reason why the USA invaded Vietnam was because of the upcoming elections. Johnson had only been in power for a year and already he was beginning to lose support for not doing anything in Vietnam. This made Johnson want to invade North Vietnam, as this was a chance to do something special, where he could gain more support from the American public. Johnson believed that a victory in Vietnam would safely secure his place as president for another term. Another reason why Johnson wanted to invade North Vietnam was because he wanted to get out of Kennedy's shadow. Kennedy was extremely popular with the American public, when Kennedy died it was seen by many that Johnson was just covering as president until the elections came around. ...read more.

If the USA did not invade North Vietnam it would appear as if they were blowing hot air, as they were talking about the things they wanted to do to communism, but they never followed up with actions. By invading they are letting the communists know that they will stand up and fight for what they believe in. Containment and the Domino Theory acted as another reason for invading Vietnam. The US's policy has always been to contain communism and to not let it spread, otherwise the "Domino Theory" will occur, when if one country falls to communism so will the others around. Over the last few years prior to the invasion Ho Chi Minh was becoming more popular and so was communism. The US felt that they had to react quickly otherwise North Vietnam would take over South Vietnam, so in order to contain communism and stop the domino effect they had to invade Vietnam. The USA wanted to make an example to Russia, this acted as another reason to invade Vietnam. Like in Korea, the US wanted to stop Communism in Vietnam to deliver a blow to the Soviets. ...read more.

Ho Chi Minh began producing large and effective army, known as the Vietminh, as well as organising guerrilla fighters to terrorise the south. This made the US get involved in Vietnam as eventually the communists would try and take over South Vietnam, the Americans had to act fast. The last reason why the Americans invaded Vietnam was because a large division was forming in South Vietnam, with the majority of the population wanting Communism. The Americans had to try and lower communist support and to do this they had to fight the communists to show which is stronger. If the Americans did not fight South Vietnam would have eventually fallen to communism and the threat of communism escalating would have certain. To conclude I feel that the most significant factor that made the US get involved in Vietnam in 1965 was the Foreign Policy factor. I believe that this factor is the most significant to the invasion as they were only doing this to stop the spread of communism and to stop the power of the Russians growing. Despite this I do feel that the Americans truly believed that the battle would be an easy victory, as they thought they were a third world country and that the power, support and wealth of the US would avail. Tom Philpot 13R ...read more.