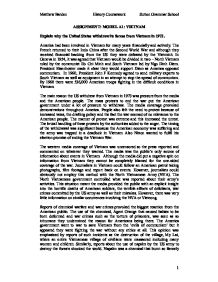 Why did the US withdraw from Vietnam in 1973

ASSIGNMENT: MODEL A1: VIETNAM Explain why the United States withdrew its forces from Vietnam in 1973. America had been involved in Vietnam for many years financially and actively. The French returned to their Indo China after the Second World War and although they received financial backing from the US they were defeated by the Vietminh. In Geneva in 1954, it was agreed that Vietnam would be divided in two - North Vietnam ruled by the communist Ho Chi Minh and South Vietnam led by Ngo Dinh Diem. President Eisenhower made it clear they would support Diem as America opposed communism. In 1960, President John F Kennedy agreed to send military experts to South Vietnam as well as equipment in an attempt to stop the spread of communism. By 1968 there were 536,000 American troops fighting in the difficult conditions in Vietnam. The main reason the US withdrew from Vietnam in 1973 was pressure from the media and the American people. The mass protests to end the war put the American government under a lot of pressure to withdraw. The media coverage provoked demonstrations throughout America. People also felt the need to protest because of increased taxes, the drafting policy and the fact the war seemed of no relevance to the American people. ...read more.

The media coverage was a significant factor but not the only one. The financial aspects of the war affected everyone in America. The war was costing the American government $66 million a day so were forced to increase income taxes and cut financial backing for schemes put in place to reduce poverty. Obviously increases in taxes angered people but cutting back on the poverty reduction scheme caused uproar, especially among ethnic minorities. Black people were the racial group suffering from the greatest poverty in the USA at this time. However, this was not the only reason black people were so opposed to the war. The conscription system excluded people at college which meant that the working class, including many black people, were forced to fight. The injustice of this situation was added to by the fact many felt it would be more appropriate for black people to fight for their own rights in their own country. It not surprising there were many violent riots by black people in the late sixties. The draft continued to cause distress for everyone who had already lost friends and family as they died because they were forced to fight in the war. ...read more.

The American economy was very strong but America would be unable to support the war indefinitely. Furthermore the American army were trapped in a war of attrition where no immediate victory was in sight. The Vietcong fought with guerrilla tactics which were very effective in the dense forests of Vietnam. However, the Americans were ineffective and inexperienced in fighting in such a difficult terrain climate. Another problem facing the US army was the low morale of the remaining troops. Most of the soldiers simply aimed to survive each day and evade capture by the Vietcong. They did not believe in the war, whereas their enemy was fighting with passion for their independence as they had done for years. When the American troops had to fight they fought without inspiration or determination. The final contributing factor to the withdrawal from Vietnam in 1973 was the president, Richard Nixon. He was in office from 1968 to 1974 and had been elected on the promise of withdrawing from Vietnam; if he wanted to be re-elected he needed to fulfil this promise. In 1969 the first troops were brought home and this continued until the remaining troops left in 1973. ?? ?? ?? ?? Matthew Barden History Coursework Sutton Grammar School 1 ...read more.