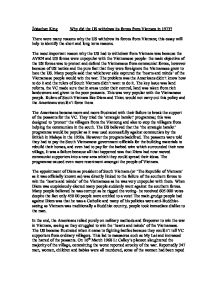 Why did the US withdraw its forces from Vietnamin 1973?

Jonathan King Why did the US withdraw its forces from Vietnam in 1973? There were many reasons why the US withdrew its forces from Vietnam; this essay will help to identify the short and long term reasons. The most important reason why the US had to withdraw from Vietnam was because the AVRN and US forces were unpopular with the Vietnamese people- the main objective of the US forces was to protect and defend the Vietnamese from communist forces, however because of US tactics and the pure fact that they were foreigners the Vietnamese grew to hate the US. Many people said that whichever side captured the 'hearts and minds' of the Vietnamese people would win the war. The problem was the Americans didn't know how to do it and the rulers of South Vietnam didn't want to do it. The key issue was land reform, the VC made sure that in areas under their control, land was taken from rich landowners and given to the poor peasants. This was very popular with the Vietnamese people. Rulers of South Vietnam like Diem and Thieu would not carry out this policy and the Americans wouldn't force them. The Americans became more and more frustrated with their failure to break the support of the peasants for the VC. They tried the 'strategic hamlet' programme; this was designed to 'protect' the villagers from the Vietcong and also to stop the villagers from helping the communists in the south. ...read more.

The news film of the Tet offensive had a dramatic effect. Especially moving was the filming of VC guerillas fighting in the grounds of the US embassy. This symbolized America's failure to keep order and stability in Vietnam. It highlighted the fact that if the US troops could not hold their own embassy then they had no hope in defending anything else but most of all highlighted the fact that the US forces were fighting a losing battle against a determined enemy. Walter Cronkite, America's most respected TV journalist saw the news film, 'What the hells going on, I thought we were winning this war?' he said. Cronkite's opinion reflected the majority of the nations after the Tet news film were released. As the war went on more and more stories of war atrocities broke out into the media. And by 1967 there was a public up rise against President Johnson or 'War Criminal' as many anti-war placards named him. Forms of protest included draft card burning where men who were drafted or conscripted into the army burnt there draft cards they received through the post by draft boards. Many universities formed large scale protests and revolts against America's consistency to fight the war in Vietnam. In 1971 more revelations about the war strengthened the growing opposition movement which the US government were finding hard to ignore. The US public was gradually starting to pull its nation from the war in Vietnam- 'Vietnamization' were the first signs of America withdrawing. ...read more.

The Guerilla tactics were far more effective than the US tactics as they suited the jungle terrain/environment far better than any US tactics used. The guerilla tactics used are linked to the cost of the as a combination of superior VC tactics and poor US decision making led to the Vietnam War costing the United States a lot of money. Financially, the cost of the war was easy to add up. Its social cast was proven more difficult to judge. Many Americans shared Pravda's view what the war was unjust. Those who had protested against the war became more confident on challenging the US government's policies- this was a major blow to the US government as it felt as it now no longer had the support of the majority of the US public. The war was costing America $20 billion a year and eventually Nixon would have to withdraw his troops as the country was feeding to much money into a war which couldn't be won. The withdrawal of the US troops on Vietnam was due to many different reasons, each reasons being linked some how to one another some more, some reasons were more significant to others. I think that that the Tet offensive really sparked off the public and their up rise, I believe the public was the Americans biggest rivals and they their up rise was the main reason for their country's withdrawal. However each reason listed however minor had some impact on Nixon finally withdrawing his troops from fighting a some what pointless, unjust war. ...read more.