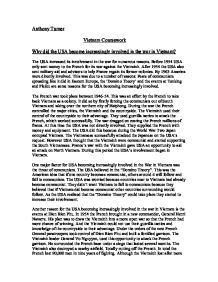 Why did the USA become increasingly involved in the war in Vietnam?

Anthony Turner Vietnam Coursework Why did the USA become increasingly involved in the war in Vietnam? The USA increased its involvement in the war for numerous reasons. Before 1954 USA only sent money to the French for its war against the Vietminh. After 1954 the USA also sent military aid and advisors to help France regain its former colonies. By 1963 America were directly involved. This was due to a number of reasons: Fears of communism spreading like it did in Eastern Europe, the 'Domino Theory' and the events at Tonking and Pleiku are some reasons for the USA becoming increasingly involved. The French war took place between 1946-54. ...read more.

France's war with the Vietminh gave USA an opportunity to aid an attack on North Vietnam. During this period the USA's involvement began in Vietnam. One major factor for USA becoming increasingly involved in the War in Vietnam was the threat of communism. The USA believed in the "Domino Theory". This was the American idea that if one country becomes communist, others around it will follow and fall to communism. The USA was worried because countries near to Vietnam had already become communist. They didn't want Vietnam to fall to communism because they believed that if Vietnam did become communist other countries surrounding would follow. As the USA realized that the "Domino Theory" could take place they started to increase their involvement. ...read more.

Totally cutting off the French. In total the French lost 90,000 men in nine years of fighting. Although the Vietminh lost allot more men, 200,000, they had made a significant victory and had won the war. As the threat of communism became even greater, the USA increased their support dramatically. They gave France money, advisors and military aid. I believe that the USA increased their involvement in the war because of the threat of communism and their belief that if one country fell to communism surrounding countries would also fall (The Domino Theory). They originally became involved when they supported France financially in their war effort because of the communist enemy Vietminh. However as during time increased their involvement because of factors such as the Truman Doctrine, the increasing threat of communism and the defeat of the French at Dien Bien Phu. ...read more.