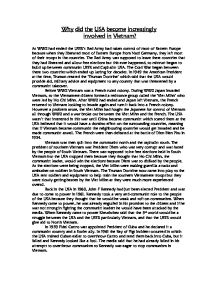 Why did the USA become increasingly involved in Vietnam? As WW2 had ended the USSR's Red Army had taken control of most of Eastern Europe because when they liberated most of Eastern Europe from Nazi Germany, they left most of their troops in the countries. The Red Army was supposed to leave these countries that they had liberated and allow free elections but this ever happened, so mistrust began to build up between communist USSR and Capitalist USA. The Cold War began between these two countries which ended up lasting for decades. In 1949 the American President at the time, Truman created the 'Truman Doctrine' which said that the USA would provide aid, military advice and equipment to any country that was threatened by a communist takeover. Before WW2 Vietnam was a French ruled colony. During WW2 Japan invaded Vietnam, so the Vietnamese citizens formed a resistance group called the 'Viet Mihn' who were led by Ho Chi Mihn. After WW2 had ended and Japan left Vietnam, the French returned to Vietnam looking to invade again and turn it back into a French colony. ...read more.

When Kennedy came to power, he was already engulfed in his promises to the citizens and if he was not strong in fighting the communist leaders he would have been attacked by the media. When Kennedy came to power Khrushchev said that the 3rd world would be a struggle between the USA and the USSR particularly Vietnam, and that the USSR would give aid to North Vietnam. In 1959 Fidel Castro was appointed President of Cuba and he declared it a communist country and a Soviet ally. In 1961 the Bay of Pigs incident occurred in which the USA trained Cuban exiles to overthrow Castro and send them back into Cuba, but it failed and Kennedy looked like a fool. The media said that he had already failed in his attempts to overthrow communism so Kennedy was eager to stop communism in Vietnam. In October 1961, a US General was sent to Vietnam to evaluate the military situation. When he arrived there was already 2000 military advisers there, but the general suggested sending another 8000-10000 more. ...read more.

Johnson then got Congress to pass the Gulf of Tonkin Resolution on 7th of August which gave Johnson the power to do whatever he wanted in Vietnam. So he took the war to a higher level. In November '64 there was a general election and Johnson won. In December 1964 the southern Vietnamese army sent 2 of its most experienced battalions of soldiers out to fight the Viet Cong and both battalions were ambushed and killed. So the US became very pessimistic about the southern Vietnamese army. In February 1965 the Viet Cong attacked US air bases and destroyed 10 helicopters, killed 8men and injured more than 100. Before February 1965 the bombing of North Vietnam was only minor but Johnson launched operation Rolling Thunder in 1965, this meant that the US began to carpet bomb North Vietnam with B-52 bombers. In March 1965 Johnson sent another 3500 men out to Vietnam to protect air bases because the war had been stepped up. By the end of 1965 there were over 200000 American troops in Vietnam. In conclusion to this question, I think America became involved because they wanted to stop the spread of communism and communism altogether. By Marcus Giannandrea 10M ...read more.