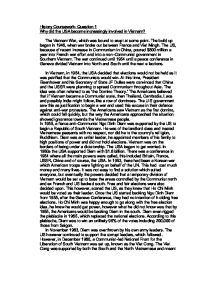 History Coursework- Question 1 Why did the USA become increasingly involved in Vietnam? The Vietnam War, which was bound to erupt at some point. The build up began in 1946, when war broke out between France and Viet Mingh. The US, because of recent increase in Communism in China, poured $500 million a year into French war effort and into a non-Communist government in Southern Vietnam. The war continued until 1954 until a peace conference in Geneva divided Vietnam into North and South until the next elections. In Vietnam, in 1954, the USA decided that elections would not be held as it was petrified that the Communists would win. At this time, President Eisenhower and his Secretary of State JF Dulles were convinced that China and the USSR were planning to spread Communism throughout Asia. The idea was often referred to as 'the Domino Theory.' The Americans believed that if Vietnam became a Communist state, then Thailand, Cambodia, Laos and possibly India might follow, like a row of dominoes. ...read more.

Once the US started backing Ngu Dinh Diem from 1955, after the Geneva Conference, they had no intention of holding free elections. Ho Chi Minh was happy enough to go along with the free election idea, he knew he would get power, however what he did not know was that by 1955, the Americans would be backing Diem in the south. Diem even rigged the plebiscite in 1965, which replaced the national elections. According to this plebiscite, Diem was to win an unlikely 98% of the votes including 200,000 of those from Saigon. In November 1963, Diem was overthrown by his own army leaders. The US however continued to support the corrupt leaders, which followed. However, in December 1960, a Communist-led National Front for the Liberation of South Vietnam was set up, known as the Viet Cong. The Viet Cong was supported by both the South and the North Vietnamese and meant taking orders from Ho Chi Minh. ...read more.

The US were not expecting this war to be hard to win, their technology was very superior, admittedly, but it was not a match compared to the Viet Cong's guerrilla tactics. American air force and supply bases were attacked and the countryside soon became unsafe for government forces. In 1962, military personnel was sent to fight the Viet Cong. In 1963 and 1964, there was great tension between the North and South of Vietnam, and the American military involvement increased, more than double the size of troops were sent over. In 1963, President Kennedy was assassinated Lyndon Johnson who was his successor was more determined to begin a full-blown war to prevent any risk of Communism. In 1964, the North Vietnamese patrol boats opened fire on US ships in the Tonkin Gulf Resolution. This made him more powerful than ever. He was now able to begin a serious was against Vietnam, if necessary. This soon became the case in 1965, 3500 US Marines came ashore at Da Nang. America was now at war with Vietnam. ...read more.