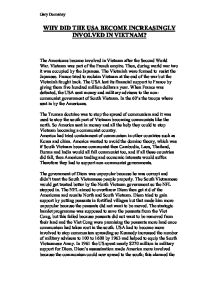 Why Did the Usa Become Increasingly Involved In Vietnam?

WHY DID THE USA BECOME INCREASINGLY INVOLVED IN VIETNAM? The Americans became involved in Vietnam after the Second World War. Vietnam was part of the French empire. Then, during world war two it was occupied by the Japanese. The Vietminh were formed to resist the Japanese. France tried to reclaim Vietnam at the end of the war but the Vietminh fought back. The USA lent its financial support to France by giving them five hundred million dollars a year. When France was defeated, the USA sent money and military advisers to the non-communist government of South Vietnam. In the 60's the troops where sent in by the Americans. ...read more.

The NFL aimed to overthrow Diem then get rid of the Americans and reunite North and South Vietnam. Diem tried to gain support by putting peasants in fortified villages but that made him more unpopular because the peasants did not want to be moved. The strategic hamlet programme was supposed to save the peasants from the Viet Cong, but this failed because peasants did not want to be removed from their land and the Viet Cong were promising the peasants more land once communism had taken root in the south. USA had to become more involved to stop communism spreading so Kennedy increased the number of military advisers to 100 to 1600 by 1963 and helped to equip the South Vietnamese Army. ...read more.

The Tonkin incident in July 1964 was when North Vietnamese gunboats attacked two American ships while they were in international waters. Johnson reacted by sending 150,000 American ground troops to South Vietnam. In February 1965 air strikes had already begun on North Vietnam. This bombing was given the name 'Operation Rolling Thunder'. This proved that America was fully committed to helping South Vietnam resist communism. Americas most important reason for getting increasingly involved in stopping South Vietnam becoming communist was the policy of containment and the domino theory because if South Vietnam became communist then a lot of other countries would and that would mean that American trading and economics interests would suffer. I don't think the other two reasons were as important because they wouldn't have much affect to the USA as the main reason. Gary Donnahey ...read more.