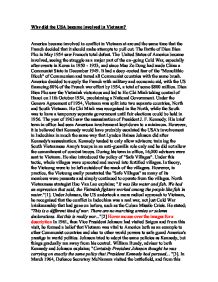 Why did the USA become involved in Vietnam? America became involved in conflict in Vietnam at around the same time that the French decided that it should make attempts to pull out. The Battle of Dien Bien Phu in May 1954 saw France's total defeat. The United States of America became involved, seeing the struggle as a major part of the on-going Cold War, especially after events in Korea in 1950 - 1953, and since Mao Ze Dong had made China a Communist State in December 1949. It had a deep-rooted fear of the "Monolithic Block" of Communism and tarred all Communist countries with the same brush. America decided to supply the French with military and economic aid, with the US financing 80% of the French war effort by 1954, a total of some $800 million. Dien Bien Phu saw the Vietminh victorious and led to Ho Chi Minh taking control of Hanoi on 11th October 1954, proclaiming a National Government. Under the Geneva Agreement of 1954, Vietnam was split into two separate countries, North and South Vietnam. ...read more.

We had an expression that said, the Vietminh fighters worked among the people like fish in water."[1]. Under Johnson, the US undertook a more radical approach to Vietnam, he recognised that the conflict in Indochina was a real war, not just Cold War brinkmanship that had gone on before, such as the Cuban Missile Crisis. He stated; "This is a different kind of war. There are no marching armies or solemn declarations. But this is really war..."[2] Hover mouse over the images for a description In 1961, then Vice President Johnson had visited Saigon and from this visit, he formed a belief that Vietnam was vital to America both as an example to other Communist countries and also to other world powers to safe guard America's prestige in world politics. Johnson tried to adopt the same policies as Kennedy, but things gradually ran away from his control. William Bundy, advisor to both Kennedy and Johnson explains; "Certainly President Johnson thought he was carrying on exactly the same policy that President Kennedy had pursued..."[3]. In March 1964, Defence Secretary McNamara visited the battlefield, and from this visit, the decision to give more aid was given the go ahead. ...read more.

President Johnson delivered the following speech as the attack planes were in the air; "Renewed hostile actions against United States ships on the high seas in the Gulf of Tonkin required me to order the military forces of the United States to take action in reply."[4]. In the ensuing bombing runs, 10% of North Vietnam's oil reserves were destroyed. The Gulf of Tonkin was also responsible for the passing of the Gulf of Tonkin Resolution on 7th August 1964 which called a blank cheque for presidential action. President Johnson jumped to the conclusion that the Vietcong were under direct control from Ho Chi Minh and so decided to bomb North Vietnam. Thus Operation Rolling Thunder was born. March 2nd 1965 saw 100 USAF fighter-bombers cross the 17th Parallel, their targets were bridges, rail lines and supply depots. It would turn out that in the eight years of air war in North Vietnam, the US would drop eight million tonnes of ordinance, four times the tonnage used in the whole of World War Two. Operation Rolling Thunder's tactic was to hit fast and hard and then cease actions for a while, a hit and fade tactic, thus President Johnson hoped to bring Ho Chi Minh and the Vietcong to the negotiation table. ...read more.