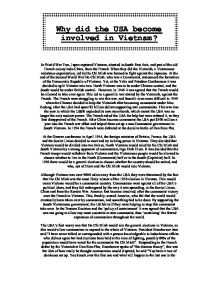 Why did the USA become involved in Vietnam? In World War Two, Japan captured Vietnam, situated in South-East Asia, and part of the old French colony Indo-China, from the French. When they did the Vietminh, a Vietnamese resistance organisation, led by Ho Chi Minh was formed to fight against the Japanese. At the end of the Second World War Ho Chi Minh, who was a Communist, announced the formation of the Democratic Republic of Vietnam. Yet, at the Yalta and Potsdam Conferences it was decided to split Vietnam into two. North Vietnam was to be under Chinese control, and the South would be under British control. However, in 1946 it was agreed that the French would be allowed to take over again. This led to a guerrilla war started by the Vietminh, against the French. The French were struggling to win this war, and found it even more difficult in 1949 when the Chinese decided to help the Vietminh after becoming communist under Mao Zedong, after the USA had spent $2 billion dollars supporting anti-communists. This was also the year in which the USSR exploded its own atom bomb, which meant the USA was no longer the only nuclear power. The French asked the USA for help but were refused it, as they first disapproved of the French. After China became communist the USA put $500 million a year into the French war effort and helped them set up a non-Communist government in South Vietnam. In 1954 the French were defeated at the decisive battle of Den Bien Phu. At the Geneva conference in April 1954, the foreign ministers of Britain, France, the USA and the Soviet Union decided to meet and try to bring peace in Vietnam. They decided that Vietnam would be divided into two halves, North Vietnam would ruled by Ho Chi Minh and South Vietnam by a strong opponent of communism, Ngo Dinh Diem. ...read more.

Some considered that violence was the only way to do this. The NLF was formed after Ho Chi Minh suggested that guerrilla units were no longer enough. He encouraged many armed groups to join together to form a more powerful resistance organisation. In December 1960, the 'National Front for the Liberation of South Vietnam' (NLF) was formed. The majority of this movement were supporters of communism, and they had a government that "represented all social classes and regions." The NLF proved very popular with the people of Vietnam, their initial objective was to gain the support of the peasants, it was said, "Without the constant and active support of the peasants- failure is inevitable". In true communist style the NLF took land from the rich and gave it to the peasants. This promise of free land to the peasants meant that they were able to persuade some peasants to help the guerrillas in their fight against the corrupt Diem government. In complete contrast to Diem's thoughtless actions, the NLF won the peasants over by being kind and generous, the NLF educated the peasants, they explained economics and how their poverty was the result of rich landowners selfishness. (They told them that 50% of the land was own by 2�/2% of the population, ? of peasants owned no land at all.) In 1961, as the USA realised that opposition was growing, they created a policy to deal with the influence of the NLF on the peasants. They called this the "Strategic Hamlet programme. Their idea was to build a stockade around camps (known as fortified villages). These were patrolled by armed guards. The USA and Diem's government worked together on this idea, which they claimed, was to save the peasants. This idea failed completely, it possibly achieved the reverse of what they originally planned, and increase the number of peasants joining the NLF. "Peasants resented working without pay to dig moats, implant bamboo stakes, and erect fences against an enemy that did not threaten its sights against government officials." ...read more.

This worked, as the maimed have to be looked after, whereas the dead simply have to be buried. In Operation Ranch Hand, the NLF who hid mainly in the forests was targeted. 1,034,300 hectares of forest was destroyed by the spraying of chemicals, including Agent Orange, which also caused chromosomal damage in people. The Chemical Agent Blue was sprayed over crops to destroy food. However, the North Vietnamese showed great ingenuity in coping with the bombing, they relocated industries in remote places, hiding them effectively. They stored arms in caves and under group, and tens of thousands of North Vietnamese women and children worked full time in keeping transport routes open. Also, it was said that the war was more hurt to the US economy, "Ten dollars for every dollars worth of damage inflicted." By the beginning of 1968 it was estimated that $300 million of damage had been done to North Vietnam, whereas in the process, 700 US aircraft, valued at $900 million had been shot down. In 1969 America wanted to get out of Vietnam without appearing defeated. President Nixon came up with the idea of 'Vietnamisation', which involved providing the South Vietnamese forces with money, training, and equipment, so they could replace American soldiers. They also had peace talks with Ho Chi Minh, and in January 1973 agreed a ceasefire, which allowed the last American soldiers to leave. The ceasefire however was meaningless, as the assaults against South Vietnam continued, and their army were unable to stop them without American help. In April 1975, Saigon, the capital of South Vietnam had fallen to the communists. Almost 30 years of warfare had been pointless, now the communists controlled Vietnam. The US had lost its first war ever, and was in tatters. One million Vietnamese people died, as well as nearly 60,000 Americans. In conclusion, it is clear why America got involved in the Vietnam War. They were scared senseless of the domino theory coming true, and of communism spreading throughout the world. In the end, even America's vast military could not stop the spread of communism. ...read more.