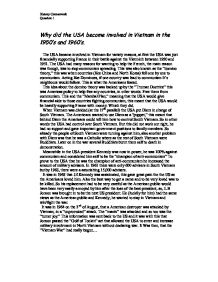 Why did the USA become involved in Vietnam in the 1950's and 1960's. The USA became involved in Vietnam for variety reasons, at first the USA was just financially supporting France in their battle against the Vietminh between 1950 and 1951. The USA had many reasons for wanting to help the French, the main reason was though, was to stop communism spreading. This was also known as the "domino theory," this was when countries (like China and North Korea) fell one by one to communism. Acting like Dominoes, if one country was lead to communism It's neighbours would follow. This is what the Americans feared. ...read more.

The Americans wanted to use Diem as a "puppet," this meant that behind Diem the Americans could tell him how to control South Vietnam. So in other words the USA had control over South Vietnam. But this did not work out right, he had no support and gave important government positions to family members. So already the people of South Vietnam were turning against him, also another problem with Diem was that he was a Catholic where as the rest of South Vietnam were Buddhists. Later on in the war several Buddhists burnt them self to death in demonstration. Meanwhile in the USA president Kennedy was now in power, he was 100% against communism and considered him self to be the "champion of anti-communism" To prove to the USA that he was the champion of anti-communism he increased the amount of military advisers. ...read more.

He (luckily for him) had the same views as the American public and Kennedy, he wanted to stay in Vietnam and win/fight the war. It was in 1964 on the 2nd of August, that a American destroyer was attacked by Vietman, in a "unprovoked" attack. The "manix" was attacked and so too was the "turner joy." This information was sent back to the US and it was with this that Jonson passed the "Golf of Tonkin" act that allowed the USA to enter and increase military involvment in North Vietnam without declaring war. It Was then, that the "Vietnam War" had really begun... History Coursework Question 1 ...read more.