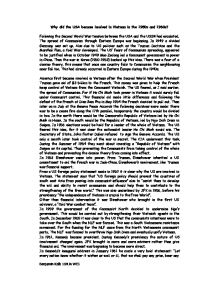 Why did the USA become involved in Vietnam in the 1950s and 1960s? Following the Second World War tension between the USA and the USSR had escalated. The spread of Communism through Eastern Europe was beginning. In 1949 a divided Germany was set up. Also due to US policies such as the Truman Doctrine and the Marshall Plan, a Cold War developed. The US' fears of Communism spreading, appeared to be justified when in October 1949 Mao Zedong led a Communist government in power in China. Then the war in Korea (1950-1953) backed up this idea. There was a fear of a domino theory, this means that once one country falls to Communism the neighbouring ones fall too. This had already occurred in Eastern Europe during the 1940s. America first became involved in Vietnam after the Second World War when President Truman gave aid of $3 billion to the French. This money was given to help the French keep control of Vietnam from the Communist Vietminh. The US feared, as I said earlier, the spread of Communism. For if Ho Chi Minh took power in Vietnam it would surely fall under Communist control. This financial aid made little difference and following the defeat of the French at Dien Bien Phu in May 1954 the French decided to pull out. Then later on in July at the Geneva Peace Accords the following decisions were made: there was to be a cease fire along the 17th parallel, temporarily the country would be divided in two. ...read more.

Therefore under Kennedy the US were there to help and aid South Vietnam to fight off Communism. Although in November 1963 before Kennedy could get anything done he was assassinated. Also in that month Ngo Dinh Diem, was overthrown. Following the assertive Kennedy in came the more aggressive Lyndon B. Johnson. LBJ was strongly anti-Communist and believed in a more military intervention. LBJ's aggressive action escalated the war from a relatively quiet counter-insurgency campaign into a fierce war. LBJ was clearly determined not to lose Vietnam to Communism. "I am not going to be the President who saw south east Asia go the way China went...I want to leave the footprints of America there. We're going to turn the Mekong into a Tennessee Valley." One clear reason behind US involvement and it also shows LBJ's aggressive front. Although it was not until August 1964 when he would be justified in doing as he claimed. For at the Tonkin Gulf there was an alleged attack on a US destroyer on patrol of the North Vietnamese coast. Following this attack LBJ said to Congress: "The threat to the free nations of south east Asia has long been clear. The North Vietnamese government has constantly sought to take over South Vietnam and Laos...The USA will continue its basic policy of assisting free nations of the area to defend their freedom." there LBJ claims the US are helping gain freedom for the South Vietnamese. Following an attack on two army installations in South Vietnam by the NLF in January 1965. ...read more.

This was counteracted by Vietnamisation. This involved rearming and training the South Vietnamese army. They would take over from the US soldiers. The war was also increased by an invasion of Laos in an attempt to destroy Communist sanctuaries and supply routes. Then in April 1970 this spread into Cambodia with intense bombing campaigns and intervention. In December 1972 the "Christmas Bombings" were carried out over the largest North Vietnamese cities, Hanoi and Haiphong. Although the war was tied up by January 1973 when the Paris Peace Agreements ended open hostilities between the two nations. In March all of the US combat troops had left Vietnam. This was only the end of the war for the US, the South Vietnamese army fought on till the fall of Saigon on April 30th 1975. The US became involved in the war for a variety of reasons. Originally due to the domino theory and defending a nation that could lose its liberty. Although as the war progressed the reason changed. As the presidents came and went their policies towards the war changed. The nature of Truman and Eisenhower's intervention was financial. Although under Kennedy it was advice and advisors. LBJ was most aggressive and involved heavy military action. Nixon was military yet also wanted peace. All through the conflict the justification came from the domino theory. It was always claimed that the fall to Communism of Vietnam would cause other countries to fall to it. Although the domino theory became obsolete as the Cold War became detente during Nixon's presidency which meant the US had to accept the fact Communism exists. Benjamin Kolb 11MJA WCS ...read more.