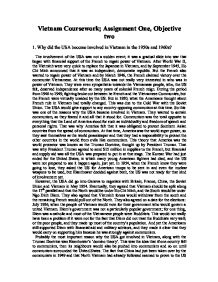 Vietnam Coursework; Assignment One, Objective two 1. Why did the USA become involved in Vietnam in the 1950s and 1960s? The involvement of the USA was not a sudden event; it was a gradual slide into war that began with financial support of the French to regain power of Vietnam. After World War II, the Vietminh were very quick to replace the Japanese in Vietnam, and by September 1945, Ho Chi Minh announced that it was an independent, democratic republic. But the French also wanted to regain power of Vietnam and by March 1946, the French claimed victory over the communist Vietnamese. At this time the USA was not really very interested in who was in power of Vietnam. They were even sympathetic towards the Vietnamese people, who, the US felt, deserved independence after so many years of colonial French reign. During the period from 1946 to 1949, fighting broke out between he French and the Vietnamese Communists, but the French were virtually unaided by the US. But in 1950, what the Americans thought about French rule in Vietnam had totally changed. This was due to the Cold War with the Soviet Union. The USA would give support to any country opposing communism at this time. So this was one of the reasons why the USA became involved in Vietnam. They wanted to contain communism, as they feared it and all that it stood for. Communism was the total opposite to everything that the Land of America stood for such as individuality and freedom of speech and personal rights. That was why America felt that it was obligated to protect Southern Asian countries from the spread of communism. At that time, America was the world super power, so they saw themselves as the world peacekeeper and that they had a responsibility to protect the other countries in the world from evils like communism. ...read more.

These sticks were often smeared with infected animal or human blood so that the wounds created became infected. Another type of trap was a pit with a covering of leaves over the top and sharpened stakes in the bottom so that when the man walked across it he would fall in and be killed or seriously wounded. Trip wires were also used to trigger off a grenade. If a soldier was wading through deep water he could catch his leg on one of these and the person behind him would have his foot or leg blown off. Mines were the more sophisticated booby traps used. They were designed so that when the soldier stepped on it, it would fly about a metre into the air before it exploded. They were designed like this to be the same height as the man's genitals so that, if he did not die, the soldier would not be able to fight anymore and this would increase the tension among the other GIs as they imagined the pain that the man was in. The VC also used tunnels to move around. The tunnels ran around Saigon for 320 km. These tunnels were used as air shelters during bombing raids. Most were quite intricate and well designed so that the Vietcong could move around freely and easily with good supplies. Even though the South Vietnamese Communists did not have any heavy artillery, the North Vietnamese did but it was very hard to get these types of equipment to the South Vietnamese Communists. They had aircraft, missiles and shelters, all provided by Russia. Although Russia and China did not actually participate in the war, Russia provided the North Vietnamese with supplies and equipment, just like America provided the South with equipment. If China and Russia had decided to participate, then it would no longer be just the Vietnam War; it would be World War 3. ...read more.

The Vietcong were very committed to their cause and were fighting for their freedom and country and where prepared to put up with huge losses, whereas the US soldiers were not fighting for their own freedom and their own country and many soldiers were very weary of the war and seeing all of their comrades die. Many of them turned to drugs and alcohol for comfort and many were 'high' when they went into battle. This obviously reduced the efficiency of the US army. The 'being short' mentality also greatly reduced the efficiency of the army. The tour of duty was one year for ordinary soldiers so when these soldiers neared the end of their tour of duty they became less willing to go into battle, they wanted to avoid any combat as far as possible. This made fighting less efficient. Tensions between officers and conscripted soldiers were high and this resulted in something called 'fragging'. The Officers were professionals and wanted to make a name for themselves so they would push their men for more 'kills'. This sometimes led to the officer being killed by his own men. On the 27th of January 1973, the Paris Peace Agreement saying that all American troops would withdraw from Vietnam was signed. One reason why it was signed at that time was that Kissinger wanted to sign the agreement before the re-elections so that Nixon would be seen well in the public eye and so that he would be re-elected, and he was. Thieu had refused to sign the agreement before, as without the aid of the US the South Vietnamese would be at the mercy of the North, but in 1973 the Americans said that they would sign without him if he wouldn't sign. So in March 1973, the last remaining troops in Saigon left Vietnam along with 691 American prisoners of war, leaving the South Vietnamese to try to fight the North by themselves, with only financial and technological aid. ...read more.