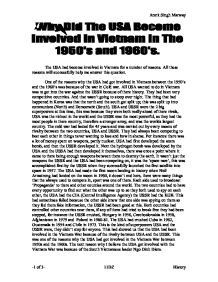 The USA had become involved in Vietnam for a number of reasons. All these reasons will successfully help me answer this question. One of the reasons why the USA had got involved in Vietnam between the 1950's and the 1960's was because of the war in Cold war. All USA wanted to do in Vietnam was to get into the war against the USSR because of there history. They had been very competitive countries. And that wasn't going to stoop over night. The thing that had happened in Korea was that the north and the south got split up; this was split up into communism (North) and Democratic (South). USA and USSR were the 2 big superpowers at this time, this was because they were both really ahead of there rivals, USA was the richest in the world and the USSR was the most powerful, as they had the most people in there country, therefore a stronger army, and was the worlds largest country. The cold war had lasted for 45 years and was carried out by every means of rivalry between the two countries, USA and USSR. They had always been competing to beet each other in things never wanting to lose and bow in shame. For instance there was a lot of money spent on weapons, partly nuclear. ...read more.

Diem himself was a big landowner and wasn't prepared to give his land to anyone; the few peasants who did get a peace of land had to pay for it in high taxes. The leader of the north, Ho Chi Minh Had distributed land all over the north; it was given to the peasants. The only thing that Diem was interested in was hunting down all communist supporters and making them think that the whole idea of communism was bad, this was done in prison camps, and this was called re-education, in total Diem had got over 12,000 people and most of them were re-educated, the ones who did not change there mind were killed. There was another election, and this was the one thing that Diem wanted least, so he had cancelled the date for the election which was meant to be held on July 1956, he knew even if he cancelled the election date the USA would still back him up. The communists in the south of Vietnam had known that the peasants wanted to fight back because they had found it unfair. Diem's plan to eliminate the Vietminh was proving to be successful as nearly all of the communist supporters in the south had nearly all been killed or re-educated. Eventually around 1959 the communist government in the north had been furious with all the attacks on the Vietminh, so they decided to take action against Diem's government. ...read more.

My last and main reason why I think that the USA became involved with the Vietnam War was because of the 'Domino theory'. The domino theory was an idea formed by President Eisenhower. This theory is clearly presented as when one country falls to communism. The idea was that all the other countries around it would also fall to communism. A good example of this was when Russia had turned communist. The country around it, China, had fell to communism and slowly North Korea and North Vietnam had also become communist. The possible countries that could fall to communism next were India, Malaysia, Japan and Australia. Eisenhower had done everything in his power to prevent the spread of communism. The theory of McCarthyism is a kind of anti-communist hysteria that had gripped the USA by the tongues; the theory was developed by a young senator, Joseph McCarthy was the person that had developed this theory to grip the USA. McCarthy had got a lot of publicity for all of these accusations and his theory. Because he had a anti-communist group no one had really tried and oppose him. In 1954 it became clear to the public that McCarthy's accusations had no evidence or proof to back him up and his lies and bullying became reveled to the public. Theses are the reasons why I believe that the USA had been involved in the Vietnam War between the 1950's and 1960's. ?? ?? ?? ?? Amrit Singh Marway -1 of 3- 11DZ History ...read more.