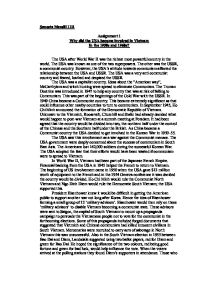 Saneeta Mandil 11R Assignment 1 Why did the USA become involved in Vietnam In the 1950s and 1960s? The USA after World War II was the richest most powerful country in the world. The USA was known as one of the two superpowers. The other was the USSR, a communist country. However, the USA's attitude towards communism affected the relationship between the USA and USSR. The USA was a very anti communist country and feared, loathed and despised the USSR. The USA was a capitalist country. Ideas about the "American way", McCarthyism and witch hunting were spread to eliminate Communism. The Truman Doctrine was introduced in 1947 to help any country that was at risk of falling to Communism. This was part of the beginnings of the Cold War with the USSR. In 1949 China became a Communist country. This became extremely significant as that could influence other nearby countries to turn to communism. In September 1945, Ho Chi Minh announced the formation of the Democratic Republic of Vietnam. Unknown to the Vietminh, Roosevelt, Churchill and Stalin had already decided what would happen to post-war Vietnam at a summit-meeting at Potsdam. ...read more.

Mercenaries were recruited to carry acts of sabotage in North Vietnam this was unsuccessful. Also in the South Vietnam election in 1955 between Bao Dai and Diem, Landsdale suggested using two ballot papers, red for Diem and green for Bao Dai. He hoped the significance of the two colours, red being good fortune and green for bad luck, would help influence the vote. When the voters arrived at the polling stations they found Diem's supporters in attendance. Those who voted for Bao Dai were beaten up. This plot seemed to work as the result of the voting went in Diem's favour. He said he achieved 98.2 percent of the vote. His American advisors warned him that these figures would not be believed and suggested that he publish a figure of around 70 percent, yet he refused. In July 1956 a general election for the whole of Vietnam was supposed to be held. On the contrary, Diem refused to accept this. Instead he began arresting his opponents. After a short period of time, approximately 100,000 people were put into prison camps. ...read more.

'The Tonkin incident' was when the destroyer 'Maddox' was sent to North Vietnamese waters to get information on their defences. On August 2nd 1964, three torpedo boats fired upon the Maddox. Maddox fired back and reported they were under attack Freak weather reports and over-eager sonar men may have accounted for many reports. Johnson used the Tonkin incident as an excuse to bomb Hanoi in an attempt to persuade North Vietnam to cut off supplies to the NLF. The issue was debated in the US Congress. The senate and the House of Representatives approved the Gulf of Tonkin Resolution. This meant Johnson could take all necessary measures against Vietnam in any way he saw fit. He won the 1964 election. Johnson launched 'Operation Rolling Thunder' in February 1965. The plan was to destroy North Vietnam by bombing and to stop her helping guerrilla fighters in the South. On March 8th 1964, 3,500 marines arrived in South Vietnam. The US marines were the first official US combat troops to be sent to Vietnam. 80 percent of the American public supported the war; this showed that the US was committed to fighting and defeating the NLF. ...read more.