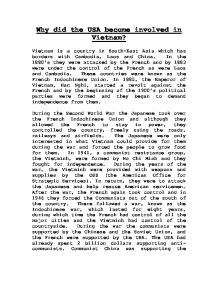 Why did the USA become involved in Vietnam? Vietnam is a country in South-East Asia which has borders with Cambodia, Laos and China. In the 1880's they were attacked by the French and by 1883 were under the control of the French as were Laos and Cambodia. These countries were known as the French Indochinese Union. In 1885, the Emperor of Vietnam, Han Nghi, started a revolt against the French and by the beginning of the 1900's political parties were formed and they began to demand independence from them. During the Second World War the Japanese took over the French Indochinese Union and although they allowed the French to stay in power, they controlled the country, freely using the roads, railways and airfields. The Japanese were only interested in what Vietnam could provide for them during the war and forced the people to grow food for them. In 1941, a communist resistance group, the Vietminh, were formed by Ho Chi Minh and they fought for independence. During the years of the war, the Vietminh were provided with weapons and supplies by the OSS (the American Office for Strategic Services). ...read more.

Although Vietnam was over 9,000 miles away from the USA, the Americans were afraid that communists were taking over the world and that they should be stopped. The USA followed a policy of containment where they were not going to allow any more countries to turn communist and were going to 'contain' the expansion of communism. In 1954, President Eisenhower put forward the 'Domino Theory' where he believed that, as the countries of South East Asia were closely linked together that if one country fell to communism, then the others would also fall, like a row of dominos. This is why the USA supported the leader of South Vietnam, Ngo Dinh Diem. He was not a communist but a catholic and he hated everything that communism stood for. Along with his brother, Nhu, he ruled South Vietnam as a dictator. He tried to find all the members of the Vietminh and get rid of them. He treated the Vietnamese peasants with contempt and had little respect for their Buddhist religion. One example of this was when a Buddhist protest about flying flags on Buddha's birthday ended with South Vietnamese Civil Guards opening fire on the protesters. ...read more.

The Americans became increasingly involved in Vietnam for a number of reasons. They were afraid that communists were going to take over the world and wanted to stop them. They had spent billions of dollars in an effort to stop communism, with over 500 million dollars being spent in Vietnam in the early stages of the fight against communism in that country. Once the Americans had shown support in South Vietnam, by sending money, equipment and troops, it would have been very difficult to just pull out of the fight. Also, once American troops began to be killed and injured by communists, the Americans had to fight back. I think that the most important reason for the increasing US involvement in Vietnam was the amount of money it had spent on fighting against Communism. If they had left Vietnam to sort out its own battles then it could have become a totally communist country. If this had happened, then the American people would have complained about the amount of money that had been spent fighting against communism, only for a country where a lot of money had been spent to come under communist rule. ...read more.