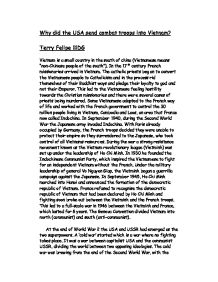 Why did the USA send combat troops into Vietnam?

Why did the USA send combat troops into Vietnam? Terry Felipe 11DG Vietnam is a small country in the south of china (Vietnamese means "non-Chinese people of the south"). In the 17th century French missionaries arrived in Vietnam. The catholic priests began to convert the Vietnamese people to Catholicism and in the process rid themselves of their Buddhist ways and pledge their loyalty to god and not their Emperor. This led to the Vietnamese feeling hostility towards the Christian missionaries and there were several cases of priests being murdered. Some Vietnamese adapted to the French way of life and worked with the French government to control the 30 million people living in Vietnam, Cambodia and Laos, an area that France now called Indochina. In September 1940, during the Second World War the Japanese army invaded Indochina. With Paris already occupied by Germany, the French troops decided they were unable to protect their empire so they surrendered to the Japanese, who took control of all Vietnams resources. During the war a strong resistance movement known as the Vietnam revolutionary league (Vietminh) ...read more.

In 1947 to reflect the American anti communist view abroad they also imposed the same restrictions on communists in the USA. From 1947-1950 over 3 million Americans were investigated for their political beliefs. The Un-American Activities Committee started to investigate Hollywood writers and actors who they believed had shown communist sympathies in their writings. 10 were put on trial and were imprisoned for failing to comment on their political stance. Eisenhower 1952-1960 He had a military background and fought in WW2 for the USA. He stated that " you have a row of dominoes, you knock over the first one, and what will happen to the last one is certainly, that it will go over very quickly." This was known as the domino theory because he thought that if one country went communist all of the other countries around it would follow on. Harry Truman's policy was that communism mustn't spread outside the USSR. Diem also believed in containment so that Vietnam doesn't become communist as well as the USSR. Eisenhower supported the domino theory and was keen to stop communism in its tracks. ...read more.

He also sent another 100 military advisers to Vietnam to help train the South Vietnamese army. After John F. Kennedy was assassinated, his deputy Lyndon B Johnson became the new president of the United States. He believed that the defence of the USA was dependant on the VIETCONG never gaining victory in South Vietnam. Johnson told his joint chiefs of staff that he would do all that was necessary to prevent the NLF winning in South Vietnam but was unwilling to take unpopular measures like sending troops to fight in a foreign war, until after the 1964 presidential elections. As the elections were not due for another 11 months, the Joint Chiefs of Staff feared that this was too long to wait. Firstly Johnson increased the amount of military advisors from 11,50 in 1962 to 23,000 in 1964. On March 8th 1964, 3.500 us marines arrived in South Vietnam, they were the first 'official' US combat troops to be sent into the country. Initially their job was to block the Ho Chi Minh trail and aid the ARVN, though later this was extended to include search and destroy missions. Within 18 months the USA was involved in a full-scale land and air war, with the Americans pounding military targets and Vietcong supply routes. ...read more.