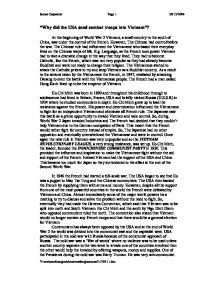 "Why did the USA send combat troops into Vietnam"? At the beginning of World War 2 Vietnam, a small country to the south of China, was under the control of the French. However, The Chinese had control before the war. The Chinese rule had influenced the Vietnamese who based their everyday lives on the Chinese ways of life. E.g. Language, as the French took power Vietnam had to take a dramatic change in the way that they lived. They had to become Catholic, like the French, which was not very popular as they had already become Buddhist and were not ready to change their religion. The Vietnamese started to attack the Catholic priests to try and keep Vietnam as a Buddhist country. As a result to the actions taken by the Vietnamese the French, in 1847, retaliated by attacking Danang to even the battle with the Vietnamese people. The French had a man called Dong Kanh lined up to be the emperor of Vietnam. Ho Chi Minh was born in 1890 and throughout his childhood through to adolescence had lived in Britain, France, USA and briefly visited Russia (U.S.S.R) in 1924 where he studied communism in depth. Ho Chi Minh grew up to lead the resistance against the French. His power and determination influenced the Vietnamese to fight for an independent Vietnam and eliminate all French rule. The Japanese saw this battle as a prime opportunity to invade Vietnam and take control. ...read more.

During the Korean war North Korea was communist whereas the south was anti-communist. Russia and the people's republic of China assisted the north. The south however, was assisted by three major world powers. USA, Britain and France. June 25th 1950 - North Korea sent 135,000 troops into the south. President Truman decided that he would help the south so he sent in ships and advisors along with troops to try and cut short the journey made by the northern troops and force them back up north. McArthur wanted to send the communists out of Korea and away from China but eventually drew up an agreement, which stated that North Korea could be communist and South Korea would be anti-communist. Fidel Castro, instead of the party supported by the Americans after the revolution, took power in Cuba. They said that they had agreed with the terms and policies of U.S.S.R and that they were communist. However, The USA stopped any form of relationship between the two in 1961. On 17th April 1961 The USA backed a group of exiled Cubans who attempted a rebellion in Cuba. The rebellion failed and the Cubans were arrested. This would be known as the "Bay Of Pigs Incident". Cuba asked for the help of Russia. This plea was accepted and the fellow communist countries united and nuclear weapons were sent into Cuba. The arrival of nuclear weapons in Cuba worried the USA, as they were no longer able to attack without the threat of nuclear warfare. ...read more.

He had nothing else to do but resort to bombing. The sheer strength and capability of the Vietcong was too much to handle in man-to-man combat so bombing was the only option left to Johnson. I think that the USA sent troops into Vietnam because it was a last resort. Previous to the troops the US had already tried to defeat the Vietcong by sending planes, boats and helicopters all of which failed. The ARVN did not have the full support of the South Vietnamese people so it could not defeat the Vietcong. The USA might also have sent in combat troops as an excuse to cover up the disaster at the Gulf of Tonkin incident and the Bay of Pigs incident. I think it was a bad idea to send vast numbers of troops in at one time because the death toll will start to increase rapidly. I also think that when Kennedy was persuading people to join the army that it was a bad idea because the people who conscripted were not trained for any form of combat so they would have died easier. The Vietcong were very powerful, disciplined and very well trained so the USA would have been no match for them. The reasons for sending troops into Vietnam is a mixture of long and short term effects because some of the pressure came from the long term events leading up to and during the war. James Carpenter Page 1 20/12/2004 20/12/2004 C:\Documents and Settings\James lee\My Documents\School\History\Vietnam_coursework.doc ...read more.