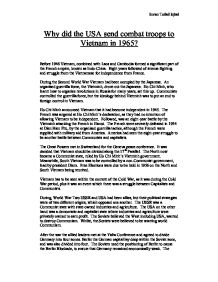 Why did the USA send combat troops to Vietnam in 1965?

Why did the USA send combat troops to Vietnam in 1965? Before 1946 Vietnam, combined with Laos and Cambodia formed a significant part of the French empire, known as Indo-China. Eight years followed of intense fighting and struggle from the Vietnamese for independence from France. During the Second World War Vietnam had been occupied by the Japanese. An organised guerrilla force, the Vietminh, drove out the Japanese. Ho Chi Minh, who learnt how to organise revolutions in Russia for many years, set this up. Communists controlled the guerrilla force, but the ideology behind Vietminh was to put an end to foreign control in Vietnam. Ho Chi Minh announced Vietnam that it had become independent in 1945. The French was angered at Ho Chi Minh's declaration, as they had no intention of allowing Vietnam to be independent. Followed, was an eight-year battle by the Vietminh attacking the French in Hanoi. The French were severely defeated in 1954 at Dien Bien Phu, by the organised guerrilla tactics, although the French were supplied with military aid from America. America had seen the eight-year struggle to be another battle between Communists and capitalists. The Great Powers met in Switzerland for the Geneva peace conference. It was decided that Vietnam should be divided along the 17th Parallel. The North now became a Communist state, ruled by Ho Chi Minh's Vietminh government. ...read more.

If the Communists choose to attack directly, then money is not enough; America decides to provide military equipment. The first true example of the containment policy being used was to defeat the Domino Theory, was in 1950 when the Communist North Korea attacked South Korea. South Korea felt isolated as the surrounding countries were run by Communists. The Americans became increasingly worried of the spread of Communism. When North Korea was seen as the aggressor, sixteen nations headed by the USA took part in the defeat of North Korea. The war ended on a stalemate and both sides agreed on a cease-fire. This prevented the Domino Theory from taking place in the Far East. Despite the threats of Communism from North Vietnam, South Vietnam was suffering immense problems of its own. The president of South Vietnam, Ngo Dinh Diem, did not hold promised elections, as he knew full well that he would lose and reunite Vietnam. America also opposed the elections, because if both sides of Vietnam reunited, the Domino Theory would be put into practice, resulting in a Communist state. President Diem was a Roman Catholic, so he was against Buddhists, who were the majority of his people. He made himself even more unpopular by persecuting the Buddhists, this lead to a Buddhist monk burning himself in the centre of the South Vietnam capital. ...read more.

The operation was continuous bombing of North Vietnam, designed to bring the North Vietnamese to the negotiating table, as the Americans hoped they would loose the will to fight. The Communist North realised that for a great chance to spread Communism, they must enter South Vietnam. Ho Chi Minh designed a way of getting into South Vietnam through Cambodia as the Americans heavily guarded the 17th parallel, this became known as the Ho Chi Minh Trail. The fears of the North Vietnamese entering the South increased greatly, as Johnson knew that combat troops would be needed to attack them when entering South Vietnam. The main reason for America sending combat troops to Vietnam in 1965, was to follow the Truman Doctrine and contain Communism, the Americans strongly believed in the Domino theory. America had tried previously all other methods of containment through military aid, huge sums of money and resources, but these did not seem to make much difference. The combat troops also used to end the Vietnam War as quickly as possible, so America would not be losing much money through funding. America could of sent combat troops from the start, but the did not as they were awaiting a different reason to deploy combat troops, because they did not want to be seen as an aggressor. A reason was found following the 'Gulf of Tonkin Incident,' and troops were desperately needed to along the Vietnam-Cambodia border to prevent the North Vietnamese from entering into South Vietnam. Imran Tofail Iqbal ...read more.