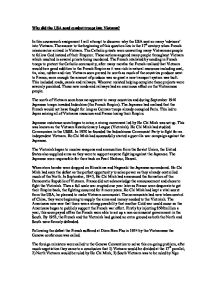 Why did the USA send troops into Vietnam

Why did the USA send combat troops into Vietnam? In this coursework assignment I will attempt to discover why the USA sent so many 'advisors' into Vietnam. The answer to the beginning of this question lies in the 17th century when French missionaries arrived in Vietnam. The Catholic priests were converting many Vietnamese people to follow God instead of their Emperor. These actions angered many people throughout Vietnam which resulted in several priests being murdered. The French retaliated by sending in French troops to protect the Catholic community, after many months the French realised that Vietnam would be a good addition to the French Empire as it was rich in natural resources including coal, tin, zinc, rubber and rice. Vietnam soon proved its worth as much of the countries produce went to France; soon enough the amount of produce was so great a new transport system was built. This included roads, canals and railways. Whoever resisted helping complete these projects were severely punished. These new roads and railways had an enormous affect on the Vietnamese people. The worth of Vietnam soon became apparent to many countries and during September 1940 Japanese troops invaded Indochina (the French Empire). The Japanese had realised that the French would not have fought for long as German troops already occupied Paris. This led to Japan seizing all of Vietnams resources and France losing their Empire. Japanese resistance soon began to arise; a strong movement led by Ho Chi Minh was set up. This was known as the Vietnam Revolutionary League (Vietminh). Ho Chi Minh had studied Communism in the USSR. ...read more.

He appointed Dulles as the Secretary of State, he believed that Communism was pure evil. Any threat from communism against any country would result in 'massive retaliation' from the US. In 1959 another test came along, Cuba and Fiedel Castro. Castro had managed to overthrow an American backed Batista Government and seize all American businesses. America then responded by refusing to buy Cuban sugar. Castro began to look for another buyer and the USSR agreed a price. The relationship between Cuba and America declined dramatically. Now America had an enemy on its doorstep. A coup was organised by Kennedy, who wanted a quick end to the situation , but before the plan could take place Castro found out and immediately exiled Batista and his followers. This event was known as The Bay of Pigs incident. Cuba felt threatened so they created a Communist Government and asked the USSR for security. The USSR was more than happy to help. They sent short and long range nuclear weapons capable of hitting all the major cities in America. America was not going to tolerate the threat of nuclear war so the army blockaded the arrival of the weapons to Cuba. An agreement was reached, the missiles were to go back to Russia. America would end the blockade and never breach Cuba's security again. The US Government realised how close a nuclear war had come, they now understood that a soft approach to Communism was unthinkable in the future. This was known as the Domino Theory and was promoted by his secretary of state John Foster Dulles. ...read more.

After losing more than a 1000 helicopters and 20 B-52 Bombers Johnson realised that he wasn't going to win with persistent bombing. He now had to send in combat troops. A poll revealed that more than 80% of the American public approved the sending in of troops supported by air raids. On the 8th March 1964, 3,500 'official' US troops were sent in. Their initial orders were to block and destroy the Ho Chi Minh trail which was the main supply route for the Guerrilla war effort in the South. In conclusion, there are many reasons why America lost the war against Vietnam. We have to look at a number of potential key dates to understand America's mistakes. The cold war was an eye opener to America as they realised that communism was a serious threat. America may have got too involved in the war, although we can argue that if America had not gotten involved, the ARVN would have been powerless to prevent the invasion of South Vietnam. The presidents involved during this war era may have been influenced by 'trigger happy' members of state. Maybe America was confident they could stop Communism in Vietnam due to the success of their war effort in North Korea not too many years before. I feel America's aims were unachievable; the troops that were fighting were not used to the terrain and climate. Whilst the Vietnamese army and their tactics were aimed at using the conditions to their advantage. Which gave the underdogs the upper hand. America had underestimated its opponent which led to America losing thousands of soldiers and losing the war. ...read more.