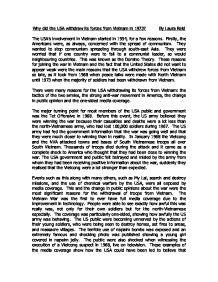 Why did the USA withdraw its forces from Vietnam in 1973

Why did the USA withdraw its forces from Vietnam in 1973? By Laura Reid The USA's involvement in Vietnam started in 1954, for a few reasons. Firstly, the Americans were, as always, concerned with the spread of communism. They wanted to stop communism spreading through south-east Asia. They were worried that if one country were to fall to a communist leader, so would neighbouring countries. This was known as the Domino Theory. These reasons for joining the war in Vietnam and the fact that the United States did not want to appear weak were the main reasons that the USA withdrew forces from Vietnam so late, as it took from 1968 when peace talks were made with North Vietnam until 1973 when the majority of soldiers had been withdrawn from Vietnam. There were many reasons for the USA withdrawing its forces from Vietnam: the tactics of the two armies, the strong anti-war movement in America, the change in public opinion and the one-sided media coverage. The major turning point for most members of the USA public and government was the Tet Offensive in 1968. ...read more.

These examples of the media coverage show how the USA could have been led to believe that American troops were doing awful things and that the war should be ended. This one-sided media coverage led to actions being taken by the public to force the government to end the war. The public were gradually changing their views to realise how awful warfare was. At the same time a culture change was happening in the USA, guided by hippies. People believed in love, not war and this generated anti-war feelings. Protests were held by many university students all over USA and the world, putting increasing pressure on the government. This was again exposed by the media so that everyone heard about the protests. People being called to war by the draft, were refusing to go and instead burning their draft papers, not in secret however, but on television as a form of protest. In May 1970 protests on campus became out of control at Kent State University. 4 students died and a few were injured as a result of gun-fire from the National Guardsmen. ...read more.

BY the end of the war over $100 billion had been spent. This did not necessarily change the lives of men in the army but more the lives of the America public, who had to pay a large amount of money through taxes, all of which was going to war and was not benefiting the country. The public had power to again put pressure on the government to end the war. Toward the end of the war Nixon introduced 'Vietnamization' which meant withdrawing troops from Vietnam, whilst at the same time continuing to fight and provide money and equipment to the South Vietnamese. This meant that the withdrawal from Vietnam took more time than was perhaps wanted but the public. The main reason for the withdrawal of troops from Vietnam in 1973 was the one sided media coverage providing the US with information on the tactics of the South Vietnamese army. This led to public opinions changing and wanting war to end. Demonstrations were then held all over USA and pressure was put on the government. The huge cost of lives and money was too much. Americans were shocked by the determination of the Vietcong during the Tet Offensive and the government knew that an end must be made to war and therefore withdrew from Vietnam in 1973. ...read more.