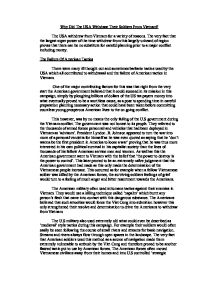 Why Did The USA Withdraw Their Soldiers From Vietnam?

Why Did The USA Withdraw Their Soldiers From Vietnam? The USA withdrew from Vietnam for a variety of reasons. The very fact that the largest super power of the time withdrew from this largely unheard of region proves that there can be no substitute for careful planning prior to a major conflict including money. The Failure Of American Tactics There were many ill thought out and sometimes barbaric tactics used by the USA which all contributed to withdrawal and the failure of American tactics in Vietnam. One of the major contributing factors for this was that right from the very start the American government believed that it could succeed in its mission in this campaign, simply by ploughing billions of dollars of the US tax payers money into what eventually proved to be a worthless cause, as a pose to spending time in careful preparation planning necessary action that could have been taken before committing countless young prosperous American lives to the on going conflict. This however, was by no means the only failing of the U.S government during the Vietnam conflict. The government was not honest to its people. They referred to the thousands of armed forces personnel and vehicles that had been deployed in Vietnam as 'advisors'. President Lyndon .B. Johnson appeared to turn the war into more of a personal vendetta for himself as he was even quoted as saying that he 'don't wanna be the first president in America to loose a war' proving that he was thus more interested in his own political survival in his capitalist society than the lives of thousands of his fellow American service men and women. ...read more.

The V.C enjoyed using prisoners as participants for 'Russian roulette'. If prisoners as it were, unlucky enough to survive Russian roulette they would be taken down to a bamboo prison which would lie in the dirty rivers of Vietnam. Soldiers would be put in these prisons well before dawn and would be left waiting for the tide to rise, which would eventually suffocate the prisoner. Another thing that the American forces had against them was the weather. They were not used to the humidity and heat of East Asia. Also they were not prepared for the terrain of Vietnam it has a moist environment and is very over grown and jungle like. The V.C however were the best in the world at dealing with this, their native climate. Soldiers became home sick and moral was always low. Many suffered mental and physical sickness. These problems too, contributed to the withdrawal of American forces from this region. After the war the suicide rate of America is said to have increased among the armed forces by as much as '40'% The Success of the V.C and the Tactics They Used. The tactics used by the V.C against the U.S was a causal factor for America's withdrawal from this conflict. The Vietcong, were the military branch of the National Liberation Front. For arms, ammunition and special equipment, the Vietcong depended on the Ho Chi Minh trail. Other needs were met inside South Vietnam. Main force Vietcong units were uniformed, full-time soldiers, and were used to launch large scale attacks. ...read more.

All across America erupted chants to the president such as 'Hey! Hey! LBJ how many kids can you kill today?' There were many similar chants from protester similar to this, which refers to so many young soldiers loosing their lives for no more than a political coup. Many middle to upper class usually white people suddenly joined college during the time when 'the draft' was introduced. They did this as this was one of the few ways in which people could avoid being called up for national service in America during the Vietnam conflict. These were often referred to as 'draft dodgers' the most famous of all being Bill Clinton. The very fact that it was largely black people fighting in Vietnam shows that there was still racism in society at the time of the Vietnam war. Black people were therefore risking their lives for liberties that the U.S government prides itself on, that the black community cannot enjoy themselves at home. Veterans of the conflict began to return home and they would tell the truth of what was happening. The American government could no longer censor information and was forced to withdraw. To conclude it could be argued that it is pointless that America fights in a world war to prevent massacre and condemns it as a war crime and then itself participates in the massacre of over 300 innocent people at Mai Lai. It appears that America has taken nothing tactically nor morally from previous wars and as the saying goes 'history has a habit of repeating itself'. Vietnam serves as ever-conclusive proof of this statement. ...read more.