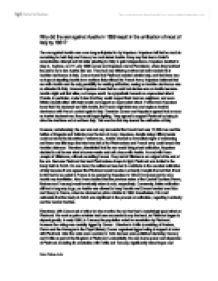 Why did the war against Austria in 1859 result in the unification of most of Italy by 1861?

Why did the war against Austria in 1859 result in the unification of most of Italy by 1861? The war against Austria was a war long anticipated for by Napoleon. Napoleon felt that he must do something for both Italy and France; he must defeat Austria. Many say that due to Orsini's assassination attempt and his letter pleading for Italy to gain independence, Napoleon decided to step in. Anyhow, on 21st July 1858 Cavour and Napoleon met at Plombieres, where they hatched the plot to try to lure Austria into war. They had very differing motives but both wanted rid of Austrian dominance in Italy. Cavour knew that Piedmont needed outside help, and that there was no hope of expelling Austria from northern Italy without the French Army. Napoleon believed that war with Austria was the only possibility for seeking unification; seeing as Austrian dominance was so attendant in Italy. However Napoleon knew that he could not declare war on Austria because Austria might well find allies, as Europe would be sympathetic towards an unprovoked attack. Prussia, in particular, made it clear that they would support their German neighbour, and even Britain (usually allies with Italy) ...read more.

Nonetheless, it is most noticeable that the treaty of Zurich was significant in the process of unification, regarding Lombardy and the Central Duchies. Elsewhere, with Cavour out of office for nine months, the war had had a surprisingly good effect on Piedmont. His work as prime minister had been successful to say the least, as Piedmont began to expand greatly. In early 1860, in Tuscany the population voted for annexation by Piedmont. However the voting was carefully rigged by Cavour . Likewise in Emilia (consisting of Modena, Parma and the Romagna in the Papal States), Cavour organised rigged voting in support of union with Piedmont. After the votes were counted, in Turin decrees were published declaring Tuscany and Emilia as part of the Kingdom of Piedmont. Undoubtedly, the new borne power and expansion of Piedmont, including its annexation with Emilia and Tuscany; significantly raised hopes and expectations of uniting Italy. Furthermore, the war with Austria helped to unify Italy, in regard to the states of Naples and Sicily. Garibaldi, despite having left Italy over ten years ago, was deeply distressed upon hearing news of Nice and Savoy being ceded to France. ...read more.

Many of the "thousand" men (it was infact now around 60,000 men) were in support of Mazzini's ideals. Which meant that they were opposed to the Church. Cavour and Victor Emmanuel were fearful that these men would run free of Garibaldi's control and cause Rome to become a progressive state. Therefore the Pope and Cavour prevented any chance of unification of Rome. It was a very delicate and tricky situation for all Cavour and Garibaldi alike, as the French forces were still and Rome and they were fearful of trifling with France. Therefore in 1861 Rome remained un-unified. Also, the war against Austria ultimately, did not result in the unification of Venetia. Under the terms of the treaty of Zurich, Venetia was to be left for Austrian domination. In conclusion, the war against Austria in 1859 resulted in the unification of the major parts of Italy. Italy was so very close to ultimate unification by 1861 as all states except for Rome and Venetia had been united under Victor Emmanuel. Also Italy was considered practically unified as the aftermath of the war had seen the expansion of Piedmont to the whole of the new Kingdom of Italy. ?? ?? ?? ?? Paris Fisher-Aziz ...read more.