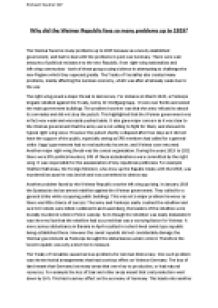 Why did the Weimar Republic face so many problems up to 1923?

﻿Nishaant Kaushal 12V Why did the Weimar Republic face so many problems up to 1923? The Weimar faced so many problems up to 1923 because as a newly established government, and had to deal with the problems in post-war Germany. There were vast amounts of political resistance to the new Republic, from right-wing nationalists and left-wing communists - both of these groups using violence in attempting to challenge the new Regime which they opposed greatly. The Treaty of Versailles also created many problems, mainly affecting the German economy, which was after all already weak due to the war. The right wing posed a major threat to democracy. For instance in March 1920, a Freikorps brigade rebelled against the Treaty, led by Dr Wolfgang Kapp. It took over Berlin and seized the main government buildings. The problem however was that the army refused to attack its comrades and did not stop the putsch. This highlighted that the Weimar government was in fact very weak and was easily pushed aside. It also gave major concern as it was clear to the Weimar government that the army were not willing to fight for them, and showed its typical right wing views. ...read more.

Even though the rebellion was easily disbanded it was the very fact that the rebellion had occurred that was a worrying factor for Weimar. A more serious disturbance in Bavaria in April resulted in a short-lived soviet-type republic being established there. However the soviet republic did not considerably damage the Weimar government as Freikorps brought the disturbances under control. Therefore the Soviet republic was only a short-term measure. The Treaty of Versailles caused serious problems for German Democracy. One such problem was the territorial arrangements that had a serious effect on Weimar Germany. The loss of land meant that Germany lost many areas that were key to production, or had natural resources. For example the loss of Saar and other areas meant that coal production went down by 16%. This had a serious effect on the economy of Germany. This leads onto another problem, reparations. In 1921 the sum of reparations was fixed at £6600 Million, and payments had to be made in kind (E.g. Coal). This would have a devastating effect on Weimar, and was very much a humiliation of Germany. ...read more.

Only 28 out of the 354 right-wing assassins were found guilty and punished, but 10 out of the 22 left wing assassins were condemned to death. This therefore meant that powerful conservative forces were able to exert great influence in the daily life of the Weimar republic, and this was at odds with the left wing?s wishes to extend civil rights and to create a modern, democratic society. In conclusion, the Weimar Republic faced so many problems up to 1923, because in trying to satisfy everyone, it did not manage to deal with the threats it faced from inside, right versus left wing, and outside Germany, the Treaty of Versailles. The treaty of Versailles weakened German democracy in many aspects and led to many distrusting the Weimar government. The extent of the opposition from the extreme right was very much underestimated, and Weimar instead overestimated the threat from the Left wing. Therefore it was the persistence of the old attitudes in the major traditional institutions that represented the greatest long-term threat to the republic. Even though the early putsches by Kapp and Hitler were too weak and disorganized to seize power, the danger of the extreme right was a growing threat to Weimar democracy. ...read more.