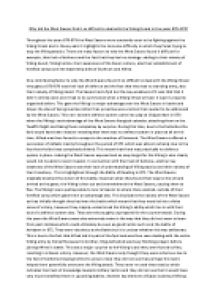 The Viking?s were perhaps able to lure to Saxons to where there wanted- outside of their fortified camp which gave them an advantage also. This implicates the naivety of the West Saxons as they initially thought they had won the battle which meant that they were led into a false sense of victory, however they majorly undermined the Viking?s ability which ties in with their lack of a defence system also. They were thoroughly unprepared for the counter-attack. During the years the West Saxons were also extremely naive in the way that they did not seem to learn from past mistakes which could ultimately be seen as good tactics such as at the battle of Ashdown in 871. They were victorious at the Battle but it is unclear whether this was deliberate. This is due to the fact that Alfred led his part of the fyrd and was then seen dealing with the entire Viking army by himself because his brother, King Aethelred was busy finishing prayers before joining Alfred in battle. ...read more.

Another factor that contributes to why the West Saxons found it difficult to deal with the Viking threat in the years 870-878 is the tactics of the Viking?s as far as their familiarity of the Saxon culture and their establishment of fortified camps are concerned. The Viking?s were seen to be extremely aware of the West Saxon liturgical calendar which added to their strength and one of the reasons why the West Saxons found it so difficult to overcome them. The Viking?s were able to use this awareness/ understanding to their advantage in Chippenham in 878 when they stormed on Alfred?s court who was celebrating the twelfth day of Christmas. The Viking?s were able to take Alfred and his forces completely by surprise and Alfred being completely unprepared for the attack which lay ahead. This surprise attack also exposed the weakness of the King and how he was unable to defend his kingdom. ...read more.