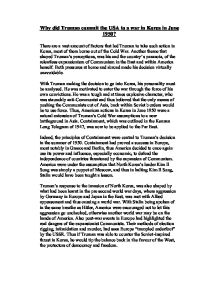 Why did Truman commit the USA to a war in Korea in June 1950?

Why did Truman commit the USA to a war in Korea in June 1950? There are a vast amount of factors that led Truman to take such action in Korea, most of them borne out of the Cold War. Another theme that shaped Truman's perceptions, was his and the country's paranoia, of the relentless expansionism of Communism in the East and within America herself. Both pressures at home and abroad made his decision virtually unavoidable. With Truman making the decision to go into Korea, his personality must be analysed. He was motivated to enter the war through the force of his own convictions. He was a tough and at times explosive character, who was staunchly anti-Communist and thus believed that the only means of pushing the Communists out of Asia, back within Soviet borders would be to use force. Thus, American actions in Korea in June 1950 were a natural extension of Truman's Cold War assumptions to a new battleground in Asia. Containment, which was outlined in the Kennan Long Telegram of 1947, was now to be applied to the Far East. Indeed, the principles of Containment were central to Truman's decision in the summer of 1950. Containment had proved a success in Europe, most notably in Greece and Berlin, thus America decided to once again use its power and influence, especially economic, to defend the independence of countries threatened by the expansion of Communism. ...read more.

However not long after the waves had calmed down over the advancement in Soviet nuclear capability, did a second shockwave rock the Truman administration. In 1949 China went Communist, even though America had ploughed in billions of dollars to keep it a democracy, as it was central to his policy in a post-war Asia, China signed a 30 year friendship pact with Stalin, falling directly under his control. The unthinkable was nearly becoming a reality, with the Communists controlling all of Asia, thus it was vital that America went into Korea to push them back. With China going Communist in 1949, the Red Scare, which started in 1947, was intensified. The domestic factors in the USA between 1945-50 were a great burden on the Truman administration. There was great hysteria throughout the country with the "Red Scare", where it was thought, that Communists had infiltrated every major American institution, most notably in Hollywood and Government. Thus the FBI under rabid anti communist Hoover pursued a campaign to hunt down the communists, and hold them to hearings under the House Committee on Un-American Activities. This led to many Hollywood actors being blacklisted, with very little support for their films at the cinema, including the great Katharine Hepburn thus forcing them to move abroad if they ever wanted to work again. ...read more.

So when North Korea crossed the 38th parallel into the south, America felt obligated by its own foreign policy to send troops to defend its interests. Since 1945 the USA had created economic ties with South Korea and when in 1950 it was invaded, the USA felt it had to honour its ties with the country and help a democratic state from unjustified aggression. Although not his primary reason for sending troops into South Korea, Truman felt that with the US being a prominent member of the UN, it was its duty to uphold its principles of democracy, as South Korea was a "democracy" for all intensive purposes under Syghman Rhee. Thus by going into South Korea, the USA was showing its altruistic side, in that it was acting for the good of world interests. Truman, therefore had no hesitation in sending his troops into Korea, he could take the moral high ground under the auspices of the UN, in that he was there to uphold freedom and honour the ties between two allies. However the main reason for sending troops into Korea was in fact a more selfish one, in that there was a perception that American interests would be gravely harmed if firm action was not taken against Korea. The pressures of the Cold War demanded a military response and thus in doing so, Truman was acknowledging that the Cold War had gone East. ...read more.