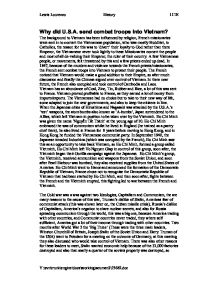 Why did U.S.A. send combat troops into Vietnam?

Why did U.S.A. send combat troops into Vietnam? The background to Vietnam has been influenced by religion, French missionaries were sent in to convert the Vietnamese population, who was mostly Buddhist, to Catholics, the reason for this was to 'divert' their loyalty to God rather than there Emperor, the Vietnamese never took lightly to these Missionaries convert the people and most of all de-valuing their Emperor, the ruler of their country. A few Vietnamese people, or movements, felt threatened by this and a few priests ended up dead. In 1847, because of the murders and violence towards the French priests/missionaries, the French sent combat troops into Vietnam to protect their people. The French noticed that Vietnam would make a good addition to their Empire, so after much discussion and finally the Chinese signed over control of Vietnam. ...read more.

Ho Chi Minh was given the name 'Nguy�n T�t Th�nh' at the young age of 10. Ho Chi Minh embraced the was of communism whilst he lived in England (he trained as a pastry chef there), he also lived in France for 8 years before moving to Hong Kong, and in Hong Kong he funded the Vietnamese communist party. In September 1940, the Japanese invaded Indochina (which was occupied by the French), Ho Chi Minh saw this as an opportunity to take back Vietnam, so Ho Chi Minh, formed a group called Vietminh, Ho Chi Minh left Vo Nguyen Giap in control of this group, soon after, the Vietminh began their Gorilla campaign against the Japanese. ...read more.

Two months after World War 2 the 'Big Three' (These were the three main leaders, Winston Churchill of Britain, Joseph Stalin of the Soviet Union and Harry Truman of the USA) went to Potsdam for a meeting on the outcome of Germany, at this meeting they also discussed who would take control of Vietnam. There was also other reasons for these leaders to meet, Stalin wanted economic help because of the 31,000 factories destroyed and also that nearly a quarter of the soviets property was destroyed, so Stalin wasn't very interested in the argument over Vietnam, this was between France and Britain. ?? ?? ?? ?? Lewis Lourenco History 11TE C:\Documents and Settings\Lewis\My Documents\Lewis' stuff\School work\History\vietnam.doc ...read more.