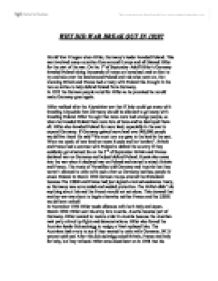 WHY DID WAR BREAK OUT IN 1939? World War II began when Hitler, Germany's leader invaded Poland. This war involved many countries from around Europe and all blamed Hitler for the start of the war. On the 1st of September Adolf Hitler's Germany invaded Poland taking thousands of troops on horseback and on foot to try and take over the land around Poland and rule what went on. Not knowing Britain and France had a treaty with Poland this brought in the two countries to help defend Poland from Germany. In 1933 the German people voted for Hitler as he promised he would make Germany great again. Hitler realised after the Abyssinian war that if Italy could get away with invading Abyssinia then Germany should be allowed to get away with invading Poland. Hitler thought that Jews were bad strange people, so when he invaded Poland there were lots of Jews and he destroyed them all. Hitler also invaded Poland for more land, especially in the east to expand Germany. If Germany gained more land over 900,000 people would live there! ...read more.

Chamberlain, the British prime minister, was worried that a war would start if Germany didn't get their own way, so lots of meetings happened between Hitler, the French and Chamberlain. They all agreed that the Germans got some of the Sudetenland at a meeting in Munich in September 1938. This is called the "Munich agreement". So as agreed Hitler's troops marched into the Sudetenland on the 1st of October 1938. Hitler invaded the rest of the Czech Republic in March 1939 and Britain and France both knew that if Hitler continues he will invade Poland as well. August 1939: Hitler realises he will need to get the USSR on his side to be able to invade Poland. So he decided to sign the Nazi-soviet pact with Stalin. They agreed not to attack each other. They also secretly divided Poland up between them; a war was about to begin! In September 1939 Germany invaded Poland, he began to demand the port of Danzig and the "Polish corridor". On the 3rd of September Britain and France declared war on Germany to help defend Poland. ...read more.

The League of Nations was suppose to stop countries invading each other and stops a war from happening, but this wasn't the case. When Italy got away with the attack Germany knew that they would be able to get away with invading a country. This helped Hitler to decide on war and other countries. The League of Nations didn't help at all. The USA helped Britain in World War 2 by giving out supplies, soldiers and bomber ships. The Germans used submarines to fire missiles at the ships that went across the Atlantic Ocean but still Britain's army got better thanks to the USA's help. Food was most important in the war and America was happy to help Britain by giving out food supplies. Also Britain's colonies helped out with supplying Britain with food and soldiers. I think the most important factor to spark World War 2 was when the League of Nations was formed. This system didn't work as they only met once a year. Hitler knew that he would be able to attack any country and the League wouldn't be able to do anything. Had the League of Nations been stronger and stricter Germany wouldn't have become so strong and this could have prevented a second war from happening. BY: ...read more.