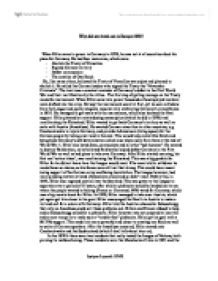 Why did war break out in Europe 1939? When Hitler came to power in Germany in 1939, he was not at all secretive about his plans for Germany. He had four main aims, which were: - Abolish the Treaty of Versailles - Expand German territory - Defeat communism - The creation of One Reich He, like many others, believed the Treaty of Versailles was unjust and planned to abolish it. He called the German leaders who signed the Treaty the "November Criminals". The treat was a constant reminder of Germany's defeat in the First World War and their mortification by the Allies. The first step of getting revenge on the Treaty would be rearmament. When Hitler came into power thousands of unemployed workers were drafted into the army. He kept the rearmament secret at first, yet he soon withdrew from the League and openly staged a massive rally celebrating Germany's armed forces in 1935. He managed to get away with the rearmament, which also boosted the Nazi support. Hitler planned on reintroducing conscription (which he did in 1936) and remilitarising the Rhineland. Hitler wanted to get back Germany's territory as well as unite with Austria (Anschluss). ...read more.

To Hitler however this was merely a piece of paper. France and Britain however, had their own clarified reasons why they came up with the Appeasement. Firstly, they were not ready for another war and standing up to Germany meant just that. It gave them more time to get ready. They also did not want a repeat of the Great War. They wished to avoid another war at all costs. An argument Britain used was that Hitler was standing up to Communism. Many people thought that the next war would be against the USSR not Germany and Hitler. Many viewed Hitler as a buffer against the threat of spreading Communism. Many also agreed with the fact that the Treaty of Versailles was in fact unfair. They assumed that once Germany got what they wanted they would become a peaceful nation again. Britain's other worries were its economical problems and empire. It was not certain that Britain's Empire and the Commonwealth states would support a war against Germany. Britain and France were still suffering from the Depression and had greats debts as well as unemployment. The USA was determined not to be dragged into another war and so there was no guarantee that Britain could face Germany without USA's help. ...read more.

If Britain and France co operated a bit more in the direction of solving world disputes the Word might have never came into being. Another major problem was America. From the very start of the League, America was the missing keystone of the organisation. Everything was going reasonable well until the Depression occurred and America isolated itself. If the USA decided to join in the League's business things might have turned out very differently as America had the resources and power to make a difference. France and Britain had too much trust in Hitler. They let him go too far and trusted a bit of signed paper (Appeasement). If they had acted sooner e.g. when Hitler went into the Rhineland, they could have prevented the war. The USSR was also partly responsible for the war. Germany might have been scared to act alone without the support of the USSR. It would have meant they would be fighting on two fronts again. If the USSR had not supported Germany then but stayed with the allies, it might have delayed or even stopped Hitler's attack. These are all factors that speeded up and made the Second World War possible. However, we cannot forget that Hitler's actions were the main reason the war had occurred and these factors mentioned merely added onto this not the other way round. ?? ?? ?? ?? Justyna Lucznik 10NR ...read more.