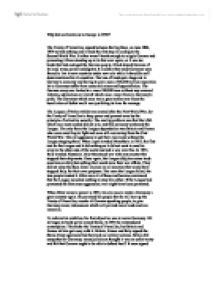 Why did war break out in Europe in 1939?The Treaty of Versailles, signed between the big three, on June 28th,1919 solved nothing and it made the first step

Why did war break out in Europe in 1939? The Treaty of Versailles, signed between the big three, on June 28th, 1919 solved nothing and it made the first step in leading to the Second World War. It either wasn't harsh enough to cripple German and preventing it from standing up to its feet ever again; or it was too harsh that had outraged the German people. It had striped German of its land, army, power and dignity. It is unfair that many Germans were forced to live in new countries under new rule while it should be self determinations for all countries. The loss of lands put a huge cut in German's economy and having to pay a sum of �6,600 million reparation let to Germany suffer from economic crises and hyperinflation. The German army was limited to a mere 100,000 men without any armored vehicles, submarines or aircraft which was a major blow to Germany's pride. The Germany which once was a great nation now faces the humiliation of defeat and it was just biting its time for revenge. The League of Nation which was created after the First World War, by the Treaty of Versailles to keep peace and prevent wars by the principle of collective security. ...read more.

Austrian Fascists wanted to unite with Germany but Schuschnigg, the Austrian Chancellor, wanted Austria to be independent. under the Nazi troops, a plebscit was held and 99.75% voted for Anschluss. In 1938, Hitler took over Austria, while Britain and France turned a blind eye. His next objective was the Sudetenland which were given to Czechoslovakia. Another piece of land where mainly German speaking people lived under, a perfect excuse for Hitler to take over. The policy of appeament was tested to the limit here. Hilter demanded that he was only interested in parts of the Sudetenland, following the appeasment, Britain and France gave in. 3 days later, he demanded all the Sudetenland and claimed that the Czech's government were mistreating them. With Mossolini's help, the Munich Aggrement was signed between Hitler, Mussolini, Chamberlain and Daladier without even consulting the Czech's Prime Minister, Benes. So far Hitler had only taken German speaking territory, so Chamberlain could still appease Hitler. However, six monthes later, Hitler threatened to bomb Prague, so the Czechs surrendered and he took over the rest of the coountry. Chamberlain realised appeasement had failed, so he began to rearm Britain and guarantee peace in Poland. The appeasment had failed. ...read more.

It was during the Great Depression that allowed Hitler and the Nazi Party to rise. Germany was recovering rapidly fast and was stabilizing under Stresserman's government. He had negotiated the Dawes Plan to help with Germany's reparation payments; the Locarno treaty then the Young Plan which further helped the international relationships. Then the Wall Street Crash in America hit Germany extremely hard because it had large numbers of US loans which were not renewed. The economic problems in Germany made it unstable and led to the polarization of politics. Hitler grabbed this opportunity and came to power by convincing Germans that he will make Germany a great nation once again. He blamed all of the problems in Germany on the Treaty of Versailles which they had been forced to sign, and also on other races (especially Jews); his solution was to wipe out all but his "master race". So the people voted for the Nazis (National Socialist German Workers Party) as it was the only alternative people believed they had. Japan invaded China as its own industry collapsed and Mussolini tried to build an oversea empire. It was the Great Depression that let to aggressive nationalism in Germany, Italy, Japan and the democratic powers failed to stop the aggression. ...read more.