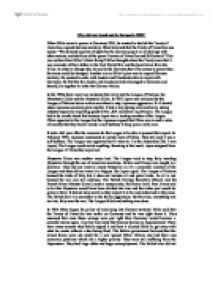 Why did war break out in Europe in 1939? When Hitler came to power in Germany 1933, he wanted to abolish the Treaty of Versailles, expand German territory. Hitler believed that the Treaty of Versailles was unjust. "We demand equality of rights for the German people in its dealings with other nations, and abolition of the peace Treaties of Versailles and St Germain" This was written from Hitler's Mein Kampf. Hitler thoughts about the Treaty were that it was reminder of their defeat in the First World War and the humiliation from the Allies. In order to change this, he said to the Germans that if he comes to power then the terms could be changed. Another aim in Hitler's plan was to expand German territory. He wanted to unite with Austria and Czechoslovakia to rejoin with Germany. He felt that the Austria and Czechoslovakia belonged to Germans and should join together to make the German Nation. In the 1930s there were two incidents that really test the League of Nations, the Manchuria Crisis and the Abyssinia Crisis. ...read more.

By this time, everything was too late. Italy won the war. The League failed and nothing was done. In 1936 Hitler began his policy of reclaiming lost German territory. Hitler said that the Treaty of Versailles was unfair on Germany and he was right about it. They assumed that once these wrongs were put right then Germany would become a peaceful nation again. A policy was made that became known as Appeasement. There were many reasons why Britain signed it and how it allowed Hitler to get away with what he wants without a shot being fired. The Britain government believed that the armed forces were not ready for a war against Hitler. Britain also had their own economic problems which are a higher priority. They were still suffering from the Depression. They had large debts and huge unemployment. The British also did not want to repeat the horrors of the Great War. Both British and French leaders vividly remembered the horrific experiences of the First World War. They wished to avoid another war at any cost. ...read more.

For Germany the Pact was perhaps the pinnacle of Hitler's triumphs. It cleared the way for Germany's invasion of Poland. When Hitler invaded Poland in 1939, Britain and France declared war on Germany. They had stood by their alliances with Poland and decided that Hitler must be stopped by force. Hitler did not expect Britain and France to do anything about Poland and why Poland? Britain and France gave Hitler a surprise. He took too many gamble and against wrong people. Although it was Hitler's actions which led to war, many other factors were important in making the war happen for instance -The terms of the Treaty of Versailles - maybe it was too harsh on Germany depending which point of view you are looking from, the League of Nations - the Manchuria and Abyssinia Crisis, the Depression - debts and huge number of unemployment therefore people might want communism, the USA's isolation - the British and French were not supported by the Americans, rearmament, appeasement-showing the weakness of Britain and France who is always trying to compromise, the USSR (the Nazi-Soviet Pact) - It's supporting the idea of Britain and France being powerless. The war broke out in Europe in 1939. The Second World War had begun. ...read more.