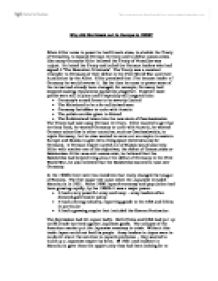 Why did War break out in Europe in 1939? When Hitler came to power he had 3 main aims, to abolish the Treaty of Versailles, to expand German territory and to defeat communism. Like many Germans Hitler believed the Treaty of Versailles was unjust. He hated the Treaty and called the German leaders who had signed it 'The November Criminals'. The Treaty was a constant reminder to Germans of their defeat in the First World War and their humiliation by the Allies. Hitler promised that if he became leader of Germany he would reverse it. By the time he came to power some of the terms had already been changed, for example, Germany had stopped making reparations payments altogether. However most points were still in place and 5 especially still angered him: * Germany's armed forces to be severely limited * The Rhineland to be a de-militarised zone * Germany forbidden to unite with Austria * The polish corridor given to Poland * The Sudetenland taken into the new state of Czechoslovakia The Treaty had take away German territory. Hitler wanted to get that territory back, he wanted Germany to unite with Austria, he wanted German minorities in other countries, such as Czechoslovakia, to rejoin Germany, but he also wanted to carve out an empire in eastern Europe and Russia to give extra living space (Lebensraum) for Germans. A German empire carved out of Russia would also help Hitler with another one of his objectives, the defeat of Communism or Bolshevism. ...read more.

These are the two blows that gave Hitler the confidence the need. He thought that if they didn't stop Mussolini from invading a country then why would they stop Hitler from invading land that used to be Germany's in the first place. It also showed him how none of the major powers wanted to risk their army and navy at war over such disputes. The thing that gave Hitler even more confidence was the fact that Britain sympathised with Hitler, first of all he was anti-communist and Britain was also very against communism at this time, and secondly, most of Britain, and especially the Politicians, sympathised with Germany as they felt the Treaty of Versailles was too harsh on Germany as well. With this in mind he knew he only had France to overcome then, and he also knew, that without Britain, France would do nothing, as proved in Manchuria and Abyssinia. Appeasement was first introduced in 1936 for a number of reasons. Firstly, Hitler was not the only concern for Britain, infact he wasn't even there main one. If anything, they were more concerned about the particular dangers to world peace opposed by Stalin, the new leader of the USSR. There were certainly many in Britain and France who, despite their agreement with Russia in 1953, wholly approved of Hitler anti-communist policies and saw Hitler as the buffer to the threat of spreading communism. Secondly, many felt that the Treaty of Versailles was unfair to Germany. They assumed that once these wrongs were put right then Germany would become a peaceful nation again. ...read more.

They announced to a stunned world that they had agreed not to attack each other. Privately and unknown to the rest of the world they had agreed to divide Poland between themselves. Hitler was now confident of success. On 1st September 1939, the German armed forces attacked Poland from the west and on 17th September Soviet forces attacked from the east. Poland soon fell, but to Hitler's surprise, Britain and France held their promises and declared war on Germany, Hitler had taken one gamble too many. Although it was Hitler's actions that led to war, there were many other factors important in the breakout of war. The league's powerlessness was a big factor, as if they had stopped Hitler in the early stages or even showed that they were not afraid to, perhaps by punishing Mussolini, then Hitler would have feared more and wouldn't have aimed so high. Neville Chamberlain's idea Appeasement was also a big factor in war, this once again gave Hitler the confidence he needed to do almost anything he wanted, as Britain would let him, then leaving no one who could stop him, as France were not a big enough force against Hitler alone. The final and maybe the most important of the three was Britain's attitude towards Hitler and war at the time. The were very against communism, and Hitler knew this, so he thought, and thought correctly that they would be on his side, all he would have to do was just say he wanted to destroy communism, despite him obviously wanting power, so Britain's ignorance in the situation was a major factor. ...read more.