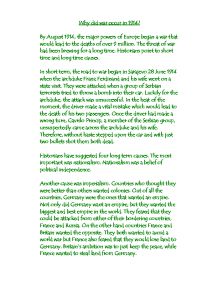 Why did war occur in 1914? By August 1914, the major powers of Europe began a war that would lead to the deaths of over 9 million. The threat of war had been brewing for a long time. Historians point to short time and long time causes. In short term, the road to war began in Sarajevo 28 June 1914 when the archduke Franz Ferdinand and his wife went on a state visit. They were attacked when a group of Serbian terrorists tried to throw a bomb into their car. Luckily for the archduke, the attack was unsuccessful. In the heat of the moment, the driver made a vital mistake which would lead to the death of his two passengers. ...read more.

Not only did Germany want an empire, but they wanted the biggest and best empire in the world. They feared that they could be attacked from either of their bordering countries, France and Russia. On the other hand countries France and Britain wanted the opposite. They both wanted to avoid a world war but France also feared that they would lose land to Germany. Britain's ambition was to just keep the peace, while France wanted to steal land from Germany. Countries also began to build up their armed forces, in particular France. They built big, intimidating artillery pointing at the Germans which would stop any attacks from them. The Germans found out a key fact about the artillery, it was all set in cement. ...read more.

When Germany found out they didn't like it so they ordered them to stop. Russia refused and therefore resulting in Germany declaring war on them. The German army moved towards France so they were put on war alert, ready to fight off an invasion. Germany then declared war, invaded Belgium and then Britain declared war on them when they wouldn't leave. To complete the picture, Austria- Hungary declared war on Russia. When Austria- Hungary declares war on Serbia, all the other powers of Europe are pulled into the equation causing a huge world war. In conclusion, I don't think it was anyone in particulars fault it was both alliance systems. There were to many people fighting other peoples war than there own. Just because a country fell out with another 9 million people died fighting for a cause not of there own nor there countries. By Marcus Unsworth 9H ...read more.