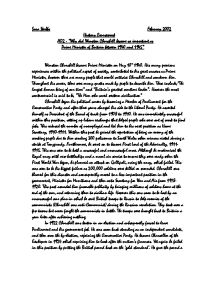 &quot;Why did Winston Churchill become so important as Prime Minister of Britain between 1940 and 1945&quot;.

Sara Stubbs February 2002 History Coursework AO2 - "Why did Winston Churchill become so important as Prime Minister of Britain between 1940 and 1945" Winston Churchill became Prime Minister on May 10th 1940. His many previous experiences within the political aspect of society, contributed to his great success as Prime Minister, however there are many people that would criticise Churchill and condemn him. Throughout his career, there were many quotes made by people to describe him. These include;"The largest human being of our time" and "Britain's greatest wartime leader". However the most controversial is said to be, "The Man who saved western civilisation" Churchill began his political career by becoming a Member of Parliament for the Conservative Party and after three years changed his side to the Liberal Party. He asserted himself as President of the Board of trade from 1908 to 1910. He was immediately successful within this position, setting up labour exchanges that helped people who were out of work to find jobs. This reduced the number of unemployed and led him to his next position as Home Secretary, 1910-1911. Within this post he gained the reputation of being an enemy of the working people due to him sending 300 policeman to South Wales when minors rioted during a strike at Tonypandy. Furthermore, he went on to become First Lord of the Admiralty, 1911-1915. This was seen to be both a successful and unsuccessful move. Although he modernised the Royal navy with new battleships and a naval air service to ensure they were ready when the First World War began, he planned an attack on Gallipoli, using the navy, which failed. ...read more.

He was graciously welcomed by all and gained a lot of support from his public outings. Furthermore, Churchill's voice created an image that people acknowledged and admired. His many speeches on the radio enabled 70% of the population to listen, his most famous being made on 4th June 1940 after the Evacuation of Dunkirk. "We shall defend our island, whatever the cost may be. We shall fight on the beaches...we shall fight in the hills; we shall never surrender" Britain was by now the only country still fighting Germany. Its only ally, France, had previously surrendered so Churchill looked for new allies. The country he most wanted as an ally was the United States of America. Churchill tried to persuade its President, Franklin Roosevelt, to join the war. Although many Americans respected the way Britain was standing up to Germany and wanted to help, they preferred to keep out of the war. All Roosevelt could do was give Britain aid in the form of weapons and naval assistance. Churchill saw the great need for American support so he traveled there to deliver his renowned speeches to the public and the congress. This led to the 'lend-lease' plan being drawn up and the 'Atlantic Charter' being signed. Churchill was classed as a 'workaholic' and soon suffered a heart attack. Instead of resting like we would usually expect, he was back working after 3 days. His 'workaholic' nature was expected to be followed by his employees. By the end of 1941 the USA had finally joined the war because of an attack made by Japan on Pearl harbor, a US naval base in the Pacific Ocean. ...read more.

His interest now was maintaining control over Greece because of the Mediterranean access. Churchill went to Greece in December 1944 to make sure there was no communist government and make a speech against them. There was an attempted assassination however it didn't hold Churchill back and he sent supplies to help the democrats in the Greek civil war. The Russians didn't interfere and the communists were defeated, proving another success for Churchill. Winston Churchill became so important as Prime Minister for Britain between 1940 and 1945 because he maintained morale during the war, providing confidence, optimism and enthusiasm for the whole five years. He was closely involved in several of his own commands, standing at the forefront during D-Day and maintaining his public image of a calm and confident leader who put the needs of the nation first. He frequently journeyed oversea, meeting with allied leaders and British troops to make remarkable speeches that would astound his listeners. His speeches on the radio were of great importance, often passionate and it was agreed that they were just what was needed to boost morale at the time. His defiance and inspiration provided hope and comfort for both the British public and the soldiers out at war, always mindful and grateful for the sacrifices made by the British civilians and military. Although Churchill was a strong and energetic leader, critics argue that his repugnance for social and economic reforms during the war alienated him from his British public. However, it is agreed that his death in 1965 marked the end of an era in British history where he will be particularly remembered for his courageous stand as Prime Minister between the years of 1940 and 1945. He was most definitely the right sort of leader to guide Britain to victory. ...read more.