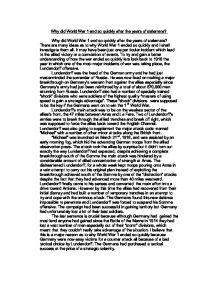 Why did World War 1 end so quickly after the years of stalemate?

Why did World War 1 end so quickly after the years of stalemate? Why did World War 1 end so quickly after the years of stalemate? There are many ideas as to why World War 1 ended so quickly and I shall investigate them all. It may have been just one particular incident which lead to the allied victory or a cumulation of events. To try and gain a better understanding of how the war ended so quickly lets look back to 1918 the year in which one of the most major incidents of war was taking place, the Lundendorff offensive. Lundendorff was the head of the German army and he had just masterminded the surrender of Russia. He was now fixed on making a major breakthrough on Germany's western front against the allies especially since Germany's army had just been reinforced by a total of about 570,000 men returning from Russia. Lundendorff also had a number of specially trained "shock" divisions who were soldiers of the highest quality "masters of using speed to gain a strategic advantage". These "shock" divisions were supposed to be the key if the Germans went on to win the 1st World War. ...read more.

Also during this time the Austria-Hungary Empire was falling apart with the Yugoslavs, Poles, Czechoslovakians and Hungarians all claiming their independence between 6th October and 1st November. On a single day there were 1,451 deserters largely from a Hungarian regiment. It was in these circumstances that Italy (supported by substantial British and French reinforcements ) launched an offensive on 24 October which became known as the Battle of Vittorio Veneto. Whole Austrian divisions deserted to Italy, which rapidly gained most of the land lost at Caporetto in 1917 as well as conquering some long-coverted territory in the Dolomites. When the Austrian Government sought a cease-fire on 3 November Germany stood alone without the aid of any allies. If you consider all of these facts that were against Germany it seems as though they didn't stand a chance against the allies. In my view even the most optimistic German would have had to question how his country could possibly defeat England, France and the U.S.A. without the aid of any allies. Perhaps the events leading up to the end of the war could have effected German morale and this in turn could have also speeded up the allied victory because some Germans soldiers may have not even believed that their country still had a chance of winning. ...read more.

Infact it was Ludendorff insisting on the armistice instead of on peace negotiations which brought down on Germany the defeat he had intended to avoid. Could it have been that Lundendorff's megalomania contributed to the speedy ending of the war? The Americans would be able to build enough ships, manufacture enough weapons, grow enough food and lend enough money to keep the allies going for years as long as the troops and President Wilson were prepared to carry on fighting. The efficiency of Germany's army, railways and factories, the advantage of its central power and the patriotic endurance of its people allowed it to defy massive material odds for four years but in the end its economic disadvantages was decisive. Another obvious factor that must be considered if we are to decide why the war ended so quickly was that at the final stage of the war, a desperate Germany signed the fourteen points treaty proposed by President Wilson than fight to the very end. This was probably a wise decision by the Germans but it did contribute to speeding up the end of the war. Reference sources: The First World War by A.J.P. Taylor The First World War by John Keegan The First World War 1914-1918 by Vyvyen Brendon Encyclopaedia Britannica 2001 Words: 2,042 By Richard Dobbs ...read more.