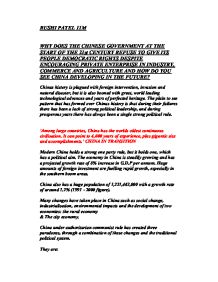 Why does the Chinese government at the start of the 21st c. refuse to give its people democratic rights despite encouraging private enterprise in industry, commerce and agriculture and how do you see China developing in the future?

RUSHI PATEL 11M WHY DOES THE CHINESE GOVERNMENT AT THE START OF THE 21st CENTURY REFUSE TO GIVE ITS PEOPLE DEMOCRATIC RIGHTS DESPITE ENCOURAGING PRIVATE ENTERPRISE IN INDUSTRY, COMMERCE AND AGRICULTURE AND HOW DO YOU SEE CHINA DEVELOPING IN THE FUTURE? Chinas history is plagued with foreign intervention, invasion and natural disaster, but it is also booned with great, world leading technological advances and years of perfected heritage. The plain to see pattern that has formed over Chinas history is that during their failures there has been a lack of strong political leadership, and during prosperous years there has always been a single strong political rule. 'Among large countries, China has the worlds oldest continuous civilisation. It can point to 4,000 years of experience, plus gigantic size and accomplishments.' CHINA IN TRANSITION Modern China holds a strong one party rule, but it holds one, which has a political aim. The economy in China is steadily growing and has a projected growth rate of 8% increase in G.D.P per annum. Huge amounts of foreign investment are fuelling rapid growth, especially in the southern boom areas. China also has a huge population of 1,221,462,000 with a growth rate of around 1.2% (1991 - 2000 figure). Many changes have taken place in China such as social change, industrialisation, environmental impacts and the development of two economies: the rural economy & The city economy. China under authoritarian communist rule has created three paradoxes, through a combination of these changes and the traditional political system. They are: 1- That freedom in industry, commerce and agriculture can exist in a society with strong authoritarian government. 2- That a free market economy exists alongside a communist government. 3- That in a communist state there is such a large rich / poor divide. This leads to the questions of exactly how these paradoxes have occurred and stabilised in China? And to what extent is it due to the continuation of authoritarian rule in a society where there is increased freedom in all areas except politics? ...read more.

The marriage law of 1950 also won support from many women because it made arranged marriages illegal. It also meant that unwanted children could not be killed and divorce was only by mutual consent. The First Five Year Plan of 1953 led to the development of heavy industry. 700 new factories and plants were created. Many new jobs in towns and cities were available. A huge movement of people followed. There was a greater need for food and the concept of co-operative farms was introduced. It proved very popular at first, with a 95% take up amongst peasant farmers. The scheme had many good points because it created jobs and paid a regular wage. This is an example of how the communists won early support amongst the people. As a part of the CCP's Common Programme, Mao introduced the idea that problems should be discussed. The Hundred Flowers encouraged people to discuss their problems, particularly urban overcrowding and food shortage. Much of the criticism became focused on Mao and his communists and the Hundred Flowers ended in a crackdown on freedom and failure for Mao. This is a clear reason why the communist do not allow free democratic rights because their previous attempts have ended in failure. During the early days of communism in China, the economy underwent many changes. The state-run People's Bank was introduced and had total control of all banking in China. The state also took control of rail and a third of industry. By the mid 1950s there was no inflation in China and food shortages were being overcome by a 15-20% cut of grain produced being sold at a fixed low price to the government. Overall, production of coal, iron, steel, oil, cement and fertiliser increased, creating more jobs and winning more support for the party. The relationship developed with the USSR from 1949 onwards meant China received financial aid and could see where a more established communist system was going wrong. ...read more.

The second possibility is that China follows the 'Singapore Solution', where it stays as an authoritarian country but loses it's political ideology. This is the most likely because the death of Deng Xiaoping in 1997 led to Jiang Zemin's rise to power. Zemin has strong ties with the PLA and is unlikely to let go of his rule over China. It is certainly true that in recent years, under Zemin, China has become more authoritarian. Deng was also the last of the founding communists and his successors are less likely to hold the belief in the strict communist doctrine. As a result, communist ideas will become less important and China will lose its political goals. This is particularly clear because when Hong Kong was returned in 1997 it was not subjected to rapid changes in it's system to make it fit in more with the communist ideology. The growth of the southern economic zones also shows how the communist system in China is not trying to retard economic growth. The third possibility is that China will become a completely democratic, capitalist country. This is less likely than the 'Singapore Solution' because of Jiang Zemin's military links. It is, however, a possibility because of the spread of democratic views. It is also true that the spread of capitalist ideas means that authoritarianism will slowly disappear. The peasantry, some of the communist's most loyal supporters, will also play a large part in China's future course. As the peasant farmers become richer they will desire democratic freedom and call for an end to authoritarianism. Whatever course China takes, it is clear that while it remains a communist country the paradoxes will still exist. It is also true that while it remains authoritarian the paradox of social freedom but democratic oppression will exist. China's future course is also likely to continue it's growth and prosperity. China is fast becoming a major power in world economics and politics. With a sustained growth rate and continuing investment China will soon outrank many major capitalist countries in the economic stakes. Rushi Patel 11M ...read more.